Earlier this month, I urged everyone to avoid purchasing Assassin’s Creed 2. The reason had to do with the absurd DRM scheme, one that essentially ruins your gameplay if you A) don’t have an Internet connection at the time or B) your Internet connection happens to drop off during gameplay. It’s unfortunate that game developers pushes around its legal customers so much, and sadly, it seems like the only way to fix the issue is to let your wallet do the talking.

As a quick reminder, this DRM scheme requires a 100% perfect Internet connection to function. As you progress through the game, if the connection drops, so does your game. You do have a bit of a lenience, but if the Internet doesn’t come back soon enough, you’ll revert to your previous save spot once you do get the game going again. It doesn’t take a brainiac to realize how nuts this scheme is.

Believe it or not, though, it’s not just Assassin’s Creed 2 that suffers this kind of DRM, but so does Command & Conquer 4. When I first learned of this, I found it a bit odd since I was benchmarking with the game the other day, but lo and behold, I remembered that I had an active connection while I was fishing for a good spot in-game to benchmark (we never have active net connections when benchmarking for final results).

So to test, I loaded up a mission, and pulled the Ethernet cable from the PC. Within ten seconds, I received the message that can be seen in the image below, “Unexpectedly disconnected from online services. Please check your Internet connection. Any progress or player experience from your current session will not be saved.” Yes, you read that right… if your Internet connection as much as goes out for a mere ten seconds (very typical, especially of wireless connections), you can say goodbye to any progress gained during that level. It doesn’t matter if you are a half-hour into the level… kiss it goodbye.

Don’t think this is a real problem? Then take a look at what EA.com’s own Editor-in-Chief has to say over at Neoseeker, “Booted twice — and progress lost — on my single-player C&C4 game because my DSL connection blinked. DRM fail.“. Enough said. 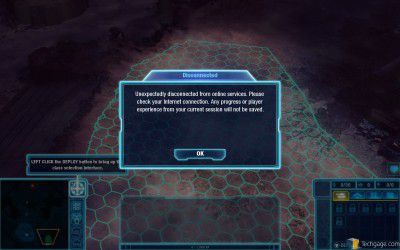 Green wrote on his Twitter account late last week: “Booted twice — and progress lost — on my single-player C&C4 game because my DSL connection blinked. DRM fail. We need new solutions,” continuing later, “Well. I’ve tried to be open-minded. But my ‘net connection is finicky — and the constant disruption of my C&C4 SP game makes this unplayable. The story is fun, the gameplay is interesting and different at least — but if you suffer from shaky/unreliable DSL — you’ve been warned.”