Corsair has been taking full advantage of Computex to show off a slew of new product, but it’s been the Carbide series of chassis that has most successfully grabbed my attention. Yes, more than the H80 and H100 CPU coolers, and even more than Link. Why? It’s because Carbide will mark the first time Corsair has launched a sub-$150 chassis offering, and for obvious reasons, that’s going to be exciting for a lot of people.

When I visited Corsair at Computex exactly two years ago, I was in awe of its Obsidian 800D, and I’m not even a “chassis guy”. In fact, I couldn’t care less about them more often than not. But the 800D was different, and in fact set some new standards in the industry. Quite impressive for the company’s first offering. Since then, Corsair has continued to follow-up with other models, but until now, has still not delivered something under $150.

Launching later this month, the Carbide series will consist of the $99 400R and $139 500R. According to Corsair, Carbide chassis have been designed for PC gamers who love the same builder-friendly design of the Obsidian and Graphite series, but are looking for options at a more aggressive price-point. At $99 for the 400R, it looks like the mark’s been hit. 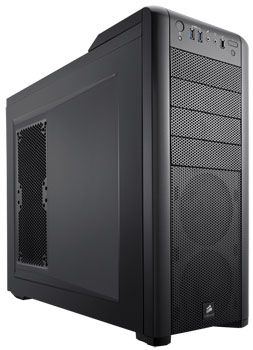 Like the bigger models Corsair offers, the Carbide series offers top-notch cable management options including the rubber grommets that hide cables well. In both the 400R and 500R, there’s enough room to support a dual-rad setup, which leads Corsair to tout its new H100 CPU cooler – but as it costs as much as the 500R, I’m not too sure we’ll see too many builds using both.

The 400R includes 3x 120mm fans and has mounts for six more, can accommodate graphics cards of up to 316mm in length (the longest GPU on the market at the moment is the Radeon HD 6990, at ~300mm), has room for four ODDs and six HDDs, offers 2x USB 3.0 ports at the front along with a FireWire, and for use with Corsair’s just-released ‘Link’, also comes equipped with a toggle switch for the lighting system. 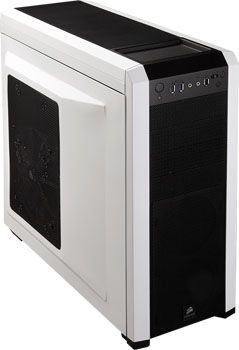 The 500R, at $40 more, offers much of the same, but introduces removable hard drive cages, and a multi-channel fan controller. Also, in addition to the 3x 120mm fans, Corsair has packed the door on the 500R with a 200mm to improve airflow hitting the graphics card.

Both the 400R and 500R chassis will be released later this month, and we’ll be sure to take a look at one of them as soon as possible..