Corsair’s Obsidian 800D Brings Many Unique Features to the Table

Just earlier, I mentioned that Corsair has been branching out quite a bit over the years with their products, and while memory is still their bread and butter, they’re still actively supplementing that with various other products, such as cooling and power supplies. First shown at CeBIT, the Obsidian 800D is the company’s first chassis, and what a chassis it is…

It’s a rare occurrence when a company releases a new product-type for the first time and it become something incredible, but where the Obsidian is concerned, the only thing I can think of is “kick-ass”. I’m in no way a chassis guy, and I tend to be one of those who couldn’t care less about what’s holding my components, but even I want one of these… big time.

First key feature is the size. This thing is massive, and as a result, “airflow issues” is a term that will suddenly cease from your vocabulary. It doesn’t matter if you want an incredibly robust water-cooling setup… you’re still going to have superb airflow. There’s a lot more to the chassis than just the size though, and really, a simple news post wouldn’t allow me to touch all of the features. 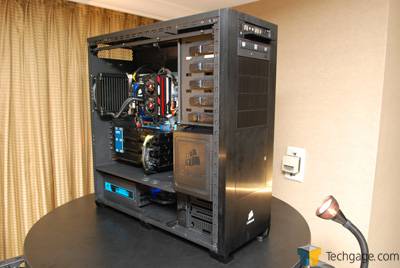 One of my favorite features are the rubber grommits that fill the “cable holes”… the holes that you will run your cables through from behind the motherboard area out to where you need to plug them in. Seems simple, but this does an unbelievable job of keeping things looking clean. It was noted by Corsair that some people from other meetings asked why the PC wasn’t even complete… and it was simply because the cabling was kept so clean.

Then there’s the unbelievable care given to water-cooling… which I won’t even touch. Just take a look at this picture to get an idea of what I’m talking about. There’s much more to mention, but for the sake of time, we’ll have to leave the rest to our review upon the product’s release. As it stands, the chassis is set to retail for around $300, and though high, it brings a lot to the table compared to other $300 chassis’ on the market.