The story of Crysis 2 is one of pain and anguish – as long as we’re talking about its launch, and PC gamers. While many believed that the game should have become a true successor to the title that became its own meme (“Can it run Crysis“), what we saw instead was a game that was heavily influenced by consoles, in way of graphics and otherwise.

Hoping to appease the situation, Crytek released a trio of patches a couple of months later that both added DirectX 11 support, along with high-resolution textures. At the time, Crytek’s CEO Cevat Yerli called it a “gift” to PC gamers, insinuating that the launch of the game sans DirectX 11 support was no big deal. Did the patch make up for things in the end?

Judging by why I’ve read in our forums and around the Web, not so much. Certain things looked a lot better, and improved lighting techniques helped make some scenes look far more realistic, but the performance hit from enabling it was a bit much, and some people backed out of DX11 support as a result.. 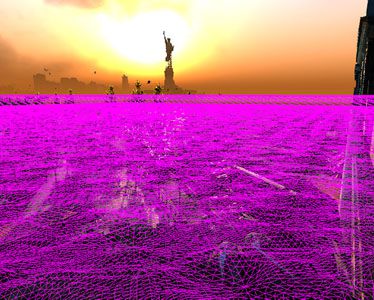 As our friends at The Tech Report have discovered, though, the DirectX 11 patch tends to raise the tessellation effect to overkill levels, when there’s simply no justification for it. In one example, a simple concrete road barrier is the most tessellated object in the entire scene, despite being one of the most simple. While there are some improvements seen with the object, “minimal improvement” isn’t a powerful enough phrase to describe it.

With the DX11 patch, Crysis 2 can tessellate water as well, which in this game happens to be a large body of water more often than not. As Scott found in his look, when the water takes up most of the scene, the water is tessellated as you’d expect. However, if you are in a level where a tessellated ocean exists, it still renders underneath the level. That means that even if you are inside of the city and the only thing around you are buildings and rubble, the ocean will continue to be rendered under the level, impacting GPU performance.

Is this the work of lazy developers? It could be. But what’s suggested in the article is that NVIDIA could have had a part in this, as its GPUs excel where tessellation is concerned. We’ve run into this controversy before where Unigine’s default tessellation scale was set to unrealistic levels, resulting in NVIDIA’s cards outperforming AMD’s. That issue has since been fixed, with user-controlled tessellation levels.

In Crysis 2 however, tessellation doesn’t seem to make a huge detail difference for most things, and in fact it seems it’s the simplest things that are affected. Could NVIDIA have possibly asked Crytek to use whatever tricks it could to get tessellation numbers high, and for that reason we see a simple concrete block that looks to have a couple of hundred thousand polygons?

We might not ever know, but what is is clear, is that’s unfortunate Crytek released such an unoptimized patch, and then had the nerve to consider it a “gift”. With this move, I feel like Crytek is bound to lose the respect of PC gamers all over, if it hasn’t already.