dBpoweramp’s CD Ripper Works Like a Dream Under Linux

Yesterday, I posted about running Office 2007 under Linux with the help of CrossOver Linux, and to quickly follow-up, I’ll say that I’ve been able to spend a lot more time with it, Excel specifically, and I’m incredibly impressed by its performance and stability. The worst problem I’ve had so far are slight redraw issues, which are easily fixed, so there are no real deal-breakers yet (except for the font-rendering, perhaps).

You may recall me whining a few weeks ago about a hard drive issue that could have ruined my day, but didn’t, thanks to TestDisk. Well as it turns out, while all my important data remained safe, I started to find a lot of my music skipping throughout certain tracks, and it became obvious that the hard drive issue caused more than just a headache.

Being an idiot, I didn’t have hard backups of the music (I was holding out on purchasing a large backup HDD… joke’s on me), so I had to make plans on how I wanted to re-rip the CDs. Well, ever since I posted about dBpoweramp this past March, about how great it was to convert large music collections, I shortly after became equally impressed with their CD ripper. But the problem of course, that it was designed for Windows, nothing else. That tends to be a problem when you have hundreds of CDs to rip and you don’t run Windows. 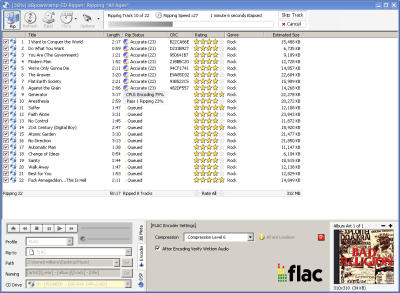 Well, I was happy to report earlier this year that dBpoweramp’s converters work well in Linux, and I can now say the same thing for their CD Ripper… something I wasn’t quite sure was going to work. It wasn’t as simple as just installing the application, for me at least, but I think it depends on the distro. My problem in particular was with incorrect symlinks for the ODDs, but that was easily fixed.

As you can see in the above image, the application looks exactly as it would in Windows, and I can attest to the fact that it’s very stable and reliable. I’m always wary of running applications through Wine when they need to be stable (especially when it comes to ripping perfect music), but I did many comparative tests, and I can say that the CD Ripper is just as stable under Linux as it is under Windows, so if it works, you don’t need to have any concerns about it causing problems with your resulting rips.

At the time of writing this post, I’ve ripped exactly 45 albums with the ripper, and I didn’t once have an issue. I can honestly say that the application is so stable, it’s just as good as having a native Linux ripper. Oh, and if you happen to be wondering why I don’t use some Linux ripper instead, it’s because I like the AccurateRip functionality and all of the features that dBpoweramp’s ripper includes. The ease-of-use helps also.