Display interfaces are not exactly the sort of tech people love to talk to friends about, but they are important none the less. For the last 15 years or so, we’ve seen slow increments with DisplayPort and HDMI. With 4K displays and the desire for higher framerates too, we keep exceeding the bandwidth these ports can handle.

VESA, that standards body behind DisplayPort, used this latest update as an opportunity to massively extend not just the bandwidth, but also the underlining technology. DisplayPort 2.0 sees a huge jump from 32.4Gbps to 80Gbps, allowing for 8K displays with HDR to work natively at 60Hz, but also changes up the encoding to become more efficient with the available bandwidth. In total, DisplayPort 2.0 has approximately 3x the available bandwidth compared to 1.4 – this is real bandwidth, after encoding losses.

Since 8K displays requires 4x the amount of pixels of 4K, it makes sense to have such a huge jump in bandwidth. But there is one question that popped into our heads almost straight away – what about the cables? 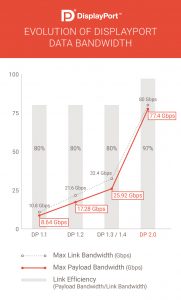 Digital is digital when it comes to cables, better cables doesn’t improve picture quality. What does become an issue is signal loss from long or cheap cables, since the tolerances on them get stretched to the limit when dealing with such vast quantities of data. We can see this with flickering or blank screens when dealing with 120Hz displays. It’s the reason why there is CAT6, CAT6a, CAT7, and CAT8 Ethernet cabling standards. They each use the same connector, but the tolerances with each twisted pair gets tighter and tighter.

DisplayPort 2.0 is practically at the limit of passive cables, and introduces active cables for the first time to reach the super high bandwidths. Active cables are ones that have integrated chips in the cable to work as signal boosters, which unfortunately makes them more expensive. Passive cables will work fine for 40Gbps, which will be suitable for 4K displays, but 6K and 8K displays will require active cables.

The underlining technology behind these big changes will quickly become apparent when Thunderbolt 3 is mentioned, since that’s basically what DP 2.0 is built around. The active cables, the huge amounts of bandwidth, and the new encoding standard, were all drafted from TB3. Intel opened up the patents on TB3 a while ago, and we’re beginning to see the benefits of it.

DisplayPort 2.0 isn’t just a direct copy of TB3 though, as VESA did some poking around with the standard to get it to work for its needs. Currently, TB3 can only provide 40Gbps at the top end, so how is DP getting twice the bandwidth? TB3 is a bi-directional, full-duplex standard, and is designed to send and receive data, 40Gbps in each direction. Since DisplayPort is only interested in sending data, it effectively turned the receive lines into transmit, and doubled the bandwidth in a single direction.

DisplayPort, HDMI, and USB Type C on a graphics card.

There’s a few extras thrown into the standard as well. Forward Error Correction is now used as standard, instead of optional with 1.4, reducing the chance for skipped frames. We will also see Display Stream Compression being available as well. This is a lossless compression standard to save power and bandwidth, allowing for compression ratios of up to 3:1 This is still optional, but available if required. Another feature that will help with laptops is Panel Replay, which only updates part of a display if there is changes, saving power in the process.

The last change will be a new port connection being available, USB Type C. VESA was uncertain as to whether to change the port type due to the fact that the original DisplayPort connector was never designed with such bandwidths in mind. However it made it work, but made USB Type C as new options. To clarify, the DP port will still be available and work, but it might be setting up USB Type C as the preferred standard in future updates. USB Type C is already the chosen connector for VR headsets with VirtualLink.

It’s not just 8K displays that will be supported either, but up to 16K (15360×8460) @60Hz with 10-bit color being an option too, thanks in part to the DSC compression. However, if the DisplayPort connector is used in alt-mode to allow data transfers as well (as USB hub or dock), then it will only be able to support an 8K display at 30Hz.

Because DisplayPort 2.0 is heavily based on Thunderbolt 3, companies will have a framework to quickly adapt new products, but we don’t expect to see anything supporting the standard until 2020, or about 18 months away. When it does come out though, the price of the cables might sting. It’s also at this point where we wonder when optical will start to take over.