Portable Document Format files, or PDF’s for short, are pretty much ubiquitous in today’s computing, as they are a standard way of sharing documents within the business world. They are used for proofing, filling out forms, NDA’s, insurance claims, and just about anything that requires information to be presented to the user within a fixed and reliable manner.

The reason PDF’s are used over an alternative, such as Microsoft Word, is that it’s secure, accurate and largely interoperable – meaning that it will work on multiple platforms and software types/versions. It’s very hard to overstate the latter, since this has been the bane of Word throughout its life. One version of Word will not work 100% with another, and the presentation may vary based on plugins and fonts available on the system.

PDF’s get around this by standardizing the way in which information is displayed, making sure that what the designer created is displayed faithfully to the user, regardless of the system, software, or fonts they are using.

However, as different versions of Word are the bane of MS Office users, so too is Adobe Reader the bane of PDF’s… it’s unbearably slow and massively bloated for what most people need. Thankfully, there are alternatives that can provide greater functionality, faster load times, and a smaller memory footprint.

First, let’s look at why anyone would want to use anything other than Adobe Reader. What is there to gain, and what could you live without?

For starters, the download is 41MB. It attempts to bundle McAfee Security Scan Plus, and installs the Adobe Download Manager along with Adobe Air, and then requires you to restart your browser for the plugin. Load times have improved since older versions, but its memory footprint starts at around 30MB, and can quickly grow to 100MB+ depending on the document. 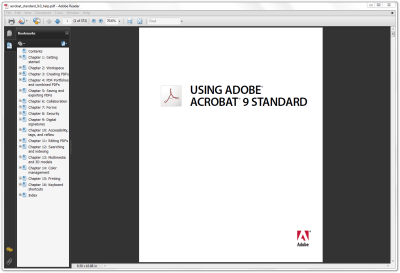 If you watch your Task Manager, you’ll see that Adobe Reader is multi-threaded, but it can consume a lot of processor time with even a simple act such as scrolling (on an aged dual-core Pentium 4, it can consume 100% of the CPU), resulting in very jerky behavior. There is no tabbed browsing, and even flicking through various options, it just feels clunky. But, it does offer a lot of customization over the presentation of the open document.

Anyone who’s serious about PDF’s and the agony that Adobe Reader can bring will probably be aware of Foxit Reader. The company has been around since 2001 and brought Reader to the market in 2004. It’s a light-weight PDF reader with support for annotations, comments and tabbed browsing. The best part of it all is that it’s completely free.

Since the release of version 4.0, however, things have not been completely rosy, as the company has started to bundle additional software and adware-like functionality to its installer. During installation it will; try to install the Foxit Search Bar, make Ask.com your default search provider, set Ask.com as your homepage, install the Firefox plugin and create Desktop, Quick Launch and Start Menu icons for eBay. Thankfully, these options can be disabled, but you have to be careful where you click, making sure to use the custom installation. 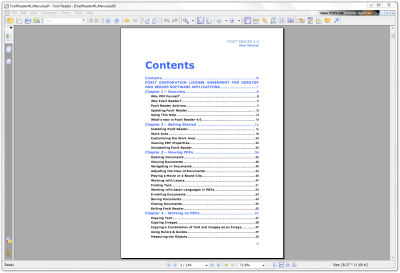 The download itself is very small at 6.7MB, and the first run memory footprint is 15MB + 6MB virtual. Foxit remains snappy in both load times and PDF browsing, even with graphically complex pages, but it does begin to struggle with very large PDF’s such as 100+ page books.

But even with rapid scrolling, the pages load fast. The program is not multi-threaded, but for the most part, it’s not required to be. It’s only with complex vector graphics that it could do with some extra help. For the average user that just wants to read PDF’s with the odd search, Foxit Reader is perfect – as long as you can get past the additional software it tries to install during installation.

If you have an aversion to beta software, you may want to give this one a miss, but Nitro PDF Reader is a very functional, full-featured PDF reader that has a lot more to offer compared to competing productions. It offers support for local PDF creation rather than through a website, form-filling, comments, content extraction and digital signing.

Nitro has been providing PDF products for quite some time and offers a very competitive package compared to Adobe’s own suite. The Nitro reader is a cut-back, free version of its Pro line. There is one design choice that may put some people off… the use of a Ribbon interface, just like Microsoft’s recent Office applications use. For many, myself included, this design can be extremely distracting as it never makes all of the options you want available, available, despite customization. 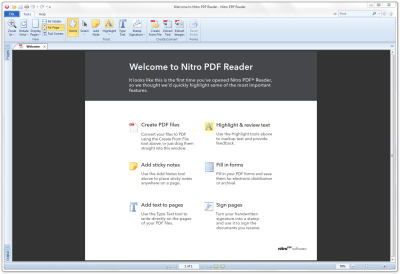 Installation is a non-event… just select/confirm the directory and that’s it. No adware, nothing. Because of the additional functionality, it’s not as small as Foxit, with a 22MB download, but it’s still half of the size of Adobe’s Reader. The base memory footprint is 70MB + 50MB virtual, which is quite a bit more than the others, and it can climb rapidly to over 200MB.

Nitro remains very snappy under rapid scrolling, despite the lack of multi-threading, but vector graphics cause it some issues. There are some problems, as you would expect with a beta, and plenty of optimizations to be made, but it’s shaping up to be quite a good alternative to Adobe’s Reader and Foxit.

Overall, Foxit and Nitro are the two best alternatives to Adobe Reader in my opinion, but we’d love to hear yours as well. Use another PDF reader that you think the world should know about? Talk about it in our related thread!