With another Intel Developer Forum in the bag, there are always bits and pieces that slipped through our fingers but deserve to be mentioned, and this one is pretty big – GIGABYTE finally launched its own dedicated UEFI. No, not the half-hearted attempt that we all know as HybridEFI. This is a full-fledged, full-featured UEFI that functions like the ones available from other manufacturers. 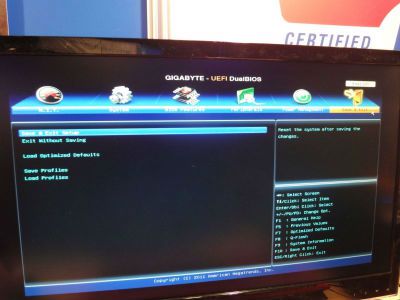 The new UEFI GUI is based around an AMI BIOS, which may come as a surprise to some considering GIGABYTE has used an AwardBIOS for as long as I can remember. Carried over in the change are GIGABYTE’s own DualBIOS and EEPROM technology that are used in the event of or to protect from a damaged BIOS. Of course the UEFI also allows booting from drives larger than 2.2 terabytes.

Many readers might be thinking, “Great! It’s about time!” Well, it’s not all sunshine and roses because GIGABYTE has only announced support for the upcoming X79 platform and there are no details about implementing the UEFI on current 6-series motherboards.

Months ago I had read in an unofficial thread on another tech forum that GIGABYTE’s 6-series motherboards have the capacity to support a UEFI. You can take this with a grain of salt but if it’s true there may be quite a few upset GIGABYTE customers, especially considering there are so many of them and the X79 platform isn’t due up until late in the first quarter of 2012.