When the latest Mac Pro was unveiled at this past summer’s WWDC, it seemed like its unique and tight-packed design would result in it being one of the most non-user upgradable Macs ever built. Well, over the past week, as some folks have begun to conduct teardowns, we can see that Apple did have ease-of-access in mind when designing this interesting machine.

The folks over at iFixit wasted no time in doing a proper teardown after their unit arrived, and some of their findings are quite interesting. For starters, the machine gets a fantastic “Repairability” score of 8 out of 10 (10 being the easiest). Look no further than the photo below to gain an understanding of how it has earned that score: 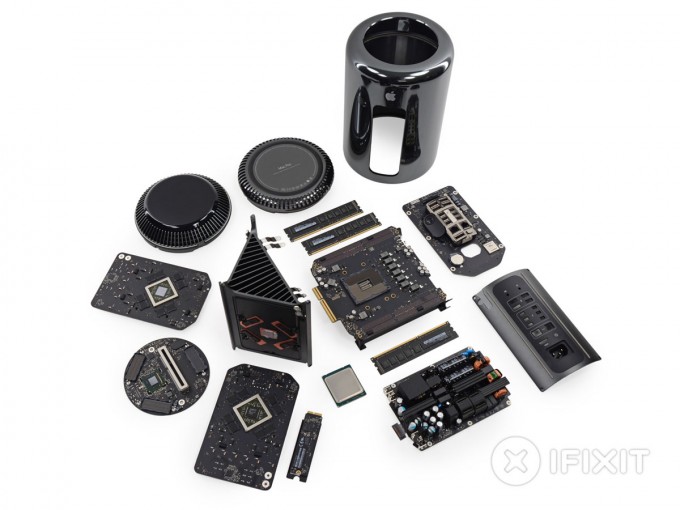 While it seemed reasonable enough to believe that Apple might have chosen to solder a lot of the major components on, it turns out that that’s not the case at all. The RAM and CPU, for example, are off-the-shelf parts, and can be replaced without issue (that assumes that the Mac Pro’s EFI firmware isn’t strict about using parts it doesn’t sell). While the SSD and GPUs use proprietary connectors, they’re both easy to remove – Apple could sell replacements / upgrades if it wanted to.

The video below does a great job of highlighting what it takes to tear down a Mac Pro to its small bits:

The most important thing to note from this teardown is that the CPU isn’t secured to its logic board. Thus, when pulling the heatsink away from the logic board, the CPU will cling to it. This is a bit of a strange design, since the only thing securing the CPU is the pressure of something being pressed against it. Compare that to a traditional LGA2011 design where it’d be impossible (example) to remove the CPU in such a manner.

That all aside, it’s good to see that Apple has proven a lot of us wrong with regards to user-repairs or user-upgradabilities. While the SSDs and GPUs use special connectors, Apple can’t be faulted for that given the Mac Pro’s design goals.

On a related note, be sure to check out our recent look at what makes the Mac Pro have such impressive pricing (when viewed from a certain perspective) compared to the PC.