It’s been a little while since we last did an “In the TG Lab”, so let’s fix that, alright? In most of these posts, we talk about products we just received and plan to take an in-depth look at, but this one is a little different, since it’s one we won’t be reviewing. Rather, it’s a hardware addition to our lab that we hope will make testing NAS boxes and other network appliances a bit more pleasant.

Where hardware is concerned, I’m led to believe that I am a bit cursed, because no matter what I do, and how careful I am, I end up killing components. Or, at least having them go nuts on me. Recently, I’ve begun taking a look at more media player-like devices, such as the Apple TV, and in the near-future, I plan to take a look at NAS boxes and potentially other network products that you guys might be interested in.

Well, oddly enough, both NICs on my Gigabyte X58A-UD5 are at the point where I feel like they are going to die, and because of it, I’ve had very slow network access speed to both my NAS box and other devices. It’s not the first time I’ve had something like this happen, so after getting fed up, I decided to do research on finding a far better network card for both my personal use, and for the sake of reliable benchmarking when I tackle network products.

After asking the knowledgeable peeps in our forums for advice on a good NIC, I had to smack my head, because I had entirely forgotten that Intel is known not only for making killer processors, but also network cards. In fact, the selection of cards it has available is truly overwhelming, and picking out the perfect one boils down mostly to cost and need.

Because I wanted a good network card that I could feel entirely confident about, I didn’t mind going a little overboard, and in this case, I might have done that. The NIC is the Ethernet Server Adapter I340, and it’s called “Server Adapter” for a reason. This card is designed for high-bandwidth situations, ultimate in reliability, and features four ports for the superb connectivity.

The useful thing about this card is that it’s designed for multi-core processors, which is perfect for virtualized environments. For fun, that might be something I dabble a bit in at some point, since I do happen to be a bit gung-ho about different virtualization technologies. Most important to me though is quality Linux support, and thankfully, Intel is one of the leaders in that regard. Being that I run Linux as primary OS, a driver was a non-option.

There’s a lot more to this NIC that’s simply beyond me, so if you are interested in learning more, I recommend heading over to the product page to check it out. But right off the bat, I can say that it’s not a NIC I can outright recommend to anyone, because as I mentioned, it is indeed overkill. Its ~$350 price tag proves it. For more modest needs, CT and PT Intel NICs (thanks Jamie!) are going to be preferred, even if you are dealing with a home server and need great reliability. It’s when you go beyond two ports that things begin to get really pricey! 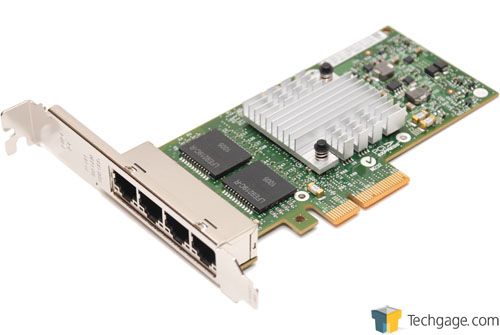