Since this past August, we’ve taken a look at three popular media players… ASUS’ O!Play Air, WD’s TV Live Plus, and most recently, AC Ryan’s Playon!HD mini. Of these, it’d be difficult to call one more feature-rich than the other, as all of them support most of the common audio and video formats, along with some Web services, such as Netflix and Flickr.

If anything, each time we review a new media player, it feels even more robust than the last, but with the Apple TV, we’re actually in a strange situation where we’re not really moving far ahead in terms of media support, but quite a bit back. But like most things Apple creates, what the Apple TV lacks in such support, it hopes to make up with in other ways, such as with exclusive iTunes integration, a classy user interface and smooth operation. Does it deliver? We’re here to find that out.

When Apple launched its first Apple TV in early 2007, no one could quite understand what the company’s goals with it were, and suffice to say, adoption was somewhat slow. But what it offered was a simple device for media fiends, especially those addicted to Apple’s iTunes, to play content on their TV… and it did those things well. This was long before such devices become a total fad, which is what we’re seeing today. It’s harder to find a company not developing these things than those that are. 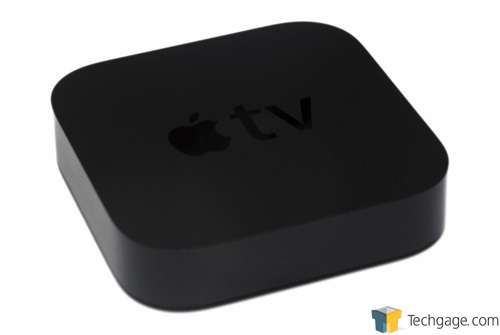 With the 2010 iteration of the Apple TV, the company has improved on the original in many ways, and has tried to appeal to a larger crowd with the introduction of Netflix support. At the same time, some aspects have been scaled back, and we’ll cover all those throughout the article. The biggest difference might be the fact that there’s no internal hard drive in this version, but rather an internal 8GB NAND flash chip used for improving the reliability of “streaming” online video.

Of course, some might argue that the “biggest” change is actually the fact that the new Apple TV is small… very small. I don’t have an original Apple TV to compare to, but the differences between the two are incredible. What I can compare it to is the recently reviewed WD TV Live Plus, which up to this point has likely been the smallest set-top media player available: 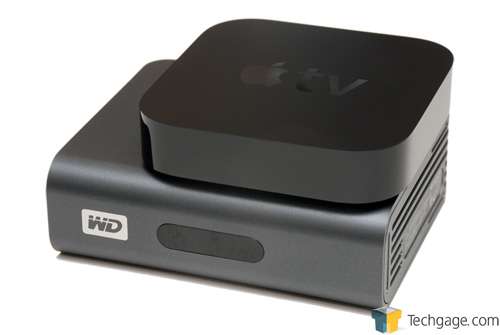 Interally, the Apple TV contains similar hardware to current iPod touch’s, which includes an Apple A4 processor that handles both the normal processing and graphics. There’s 256MB of on-board memory, and as mentioned before, 8GB of NAND flash accessible to the device only. It can be assumed that this flash could be used to store multiple movie rentals off the iTunes store, and perhaps some sort of caching that supplements the RAM.

One of the nicest features of the current-gen Apple TV is the built-in WiFi support, which seems to be somewhat of a rarity on many media players today. Overall, the entire device seems capable, but one notable “downside” is the lack of support for a 1080p output. It might seem like a strange omission, given the support can be easily found on most other media players out there, but the reason for it is simple.

The current Apple TV, like the older model, is designed to act as a gateway for those who love taking advantage of Apple’s services, such as iTunes. There, HD movies top out at 720p, not 1080p, and for that reason, this thing doesn’t need to support anything higher. Theoretically, given the A4 CPU being used here, it could no doubt handle 1080p fine for the UI and images, but Apple’s design prevents the device from having to switch between video modes when moving from the UI to HD video playback. 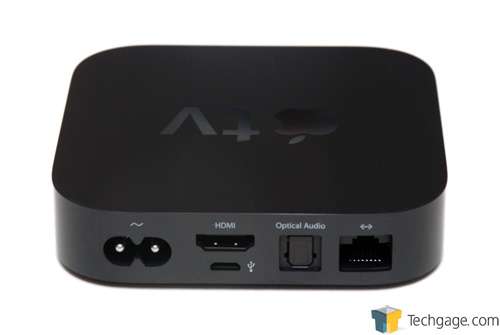 I haven’t touched on aesthetics yet, but overall, there isn’t much to say… except that it’s the best-looking media player I’ve ever had the pleasure of using. I admit that most often, I don’t like the design cues seen on Apple’s devices, primarily its desktops and notebooks (the Mac Pro being an exception), but here, the look appeals to me far more than any other device I’ve used. It’s about as pitch black as could be, smooth to the touch, and doesn’t easily attract thumb prints. The side might to an extent though, because while the top and bottom have more of a matte surface, the sides are all comprised of a glossy plastic.

At the back of the device, as seen above, is a standard-sized HDMI port, optical audio, LAN, power port, and a non-user USB port. This leads us to one of Apple TV’s biggest downfalls… the lack of support for external storage. If your network is down, bye bye media.