Over the past week, Intel has seemed to ramp up its Arc graphics marketing efforts, with some company employees posting teasers on social media, and others paying visits to select media outlets – including our friends at Gamers Nexus. Given this, it seems that Arc’s launch is going to be happening soon, but to date, Intel has kept mum on a specific launch date, as well as specs and pricing for the entire lineup of desktop-bound SKUs.

This past weekend, Wccftech (via VideoCardz) posted an Intel internal slide which was shared with partners in Taiwan. In it, not only are pricing guidelines listed, but so too are the competitive models Intel expects its different SKUs to go up against. Here’s that slide: 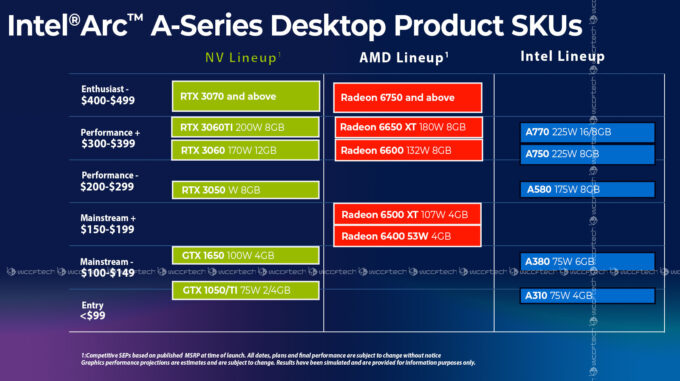 There’s a lot to glean here. When murmurs of Arc’s performance began to float around the rumor mill last year, leaks suggested that Intel’s top-end offering would go up against NVIDIA’s GeForce RTX 3070. According to this slide, however, that target is actually RTX 3060 Ti – or Radeon RX 6650 XT on the AMD side. Interestingly, though, this slide suggests the A770 could become available in a 16GB variant – rather eye-catching for a ~$400 model.

It’d be great to see options even higher-end than the A770 from Intel, since it leaves many AMD and NVIDIA parts uncontested, but being that this is the first-gen Arc, we’re just glad to see that the mainstream segment of the market is being catered to well. We’re even seeing an Arc option hovering around the $100 mark – a price-point that almost seemed to become a thing of the past in recent years.

Something that also stands out to us in the slide above is that Intel’s Arc GPUs appear to have a generally higher power consumption than the competition. The Arc A750 is spec’d at 225W, while its RTX 3060 Ti competitor is 200W, and RX 6650 XT is 180W. Likewise, the Arc A580 is 175W, whereas the RTX 3050 is 130W. Ultimately, posted power specs are one thing; we’ll have to wait and see how they all compare in real-world testing.

All of this aside, we’re eager for this Arc launch to finally happen, as it truly feels like we’ve been waiting ages for it. It was nearly three-and-a-half years ago when the company really ramped up its marketing, telling people to join its “Odyssey”. It’s already been years since fan-made GPU designs flooded social media – and yet, we still haven’t seen the first desktop series launch. It’s going to be great to finally see the launch happen, and hold a card in our own hands. Suffice to say, it will undoubtedly be interesting (and fun) to put to the test.