Intel had quite a bit to show off at this year’s CES, including the new Core H35-series of processors that will be fueling some ultraportable gaming notebooks – and are built with 10nm SuperFIN. What was also announced – or rather teased – were 11th-gen parts for desktop, specifically the direct successor to the i9-10900K, i9-11900K. 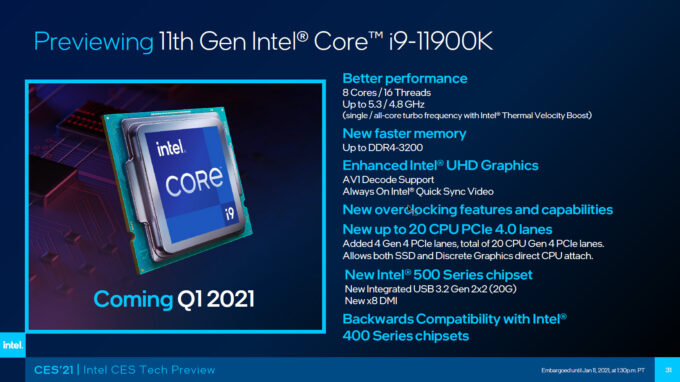 Taking a look at the specs above, one thing might jump out at you right away: the i9-11900K somehow loses two cores over the i9-10900K. That’s a bit strange, since the 10900K was a sweet upgrade to the 9900K by adding another two cores – and here we’re right back to an 8-core chip. That’s the cost of delivering the best possible gaming performance, it appears.

There are a couple of other updates, however, such as standard DDR4-3200 support, matching what AMD has enabled since its Zen 2 generation. Also new is AV1 decode support, something that’s mostly useful if you’re planning to use the 11900K without a discrete GPU – which seems unlikely. Thankfully, both of the current generations of AMD and NVIDIA GPUs also support AV1 decode.

On the graphics front, if users are equipped with a new PCIe 4.0-supporting Intel Z590 motherboard, the number of available PCIe lanes will jump from 16 to 20, allowing users to add a x4 NVMe SSD and not risk stealing away bandwidth from the the GPU. Regarding the Z590 chipset, some vendors, like ASUS and MSI, have already announced supported motherboards, adding USB 3.2 Gen 2×2 support and x8 DMI. Fortunately, the 11th-gen series will work fine in Z400 series motherboards, but will naturally forego those new perks. 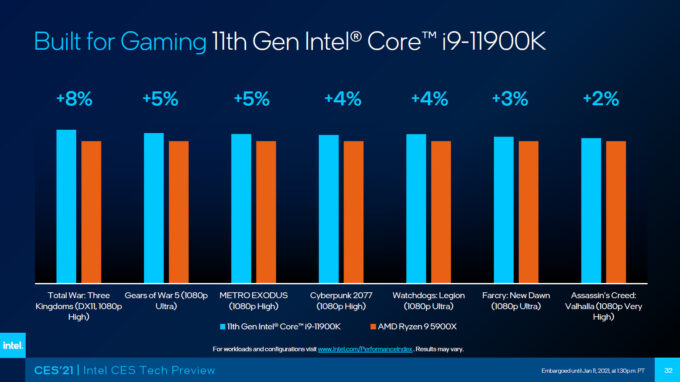 In a gaming comparison, Intel pits the 11900K against AMD’s Ryzen 9 5900X, and shows it taking the lead in these seven games. We admit that the comparison model of choice is a bit strange, since the 5900X retails for $549, and bundles in four additional cores. This has us wondering if Intel is planning to slot in at that same price-point with an eight-core chip, which would be quite something considering the ten-core i9-10900K retailed for about the same.

Intel is clearly laser-focused on gaming performance here, and it’s no surprise when it’s had such a lead for a while, and needs to regain its crown from AMD. The 11900K might not be the most exciting CPU we’ll see Intel launch, but it’s still nice to see the company doing whatever it can to eke as much gaming performance out of these chips as possible. At the end of the year, Rocket Lake-S is expected to launch, presumably as the 12th-gen Core series – and that will hopefully bring about all of the exciting updates that we’ve been anxious to see Intel deliver.