For those who’ve been anticipating the full launch of Intel’s first-gen Arc desktop graphics cards, company CEO Pat Gelsinger had some good news to share at the ongoing Intel Innovation 2022 conference, held in San Jose.

With what might be a testament to just how badly Intel wants this full launch to get over with, you could have missed the Arc mention if you blinked at the wrong time, because its coverage on stage was brief. There was enough time granted to show a quick trailer, highlighting Arc’s XeSS upscaling feature – one we’re particularly eager to test once we’re able to.

#IntelArc A770 GPUs are entering the market starting October 12, packed with modern features and technologies to deliver great gaming and ray tracing performance. Are you ready to play? #IntelON pic.twitter.com/sI1nK5Q05d

While Intel’s Arc A380 has already been released, we know that an Arc 5 model, and two Arc 7 models are en route. On stage, though, Gelsinger only mentioned the top-end model: A770. It was implied that pricing for the A770 starts at $329, which could mean Intel is planning multiple models of the same GPU – so let the speculation roll.

At that base price-point, we finally get confirmation of the A770’s direct competition: AMD’s Radeon RX 6600, and NVIDIA’s GeForce RTX 3060. We’re sure Intel would have loved to have had the A770 go against higher-end competitive products, but with how ambitious it is to enter the GPU market as a third major competitor, we’re just glad to see the lower-end part of the market so thoroughly covered. 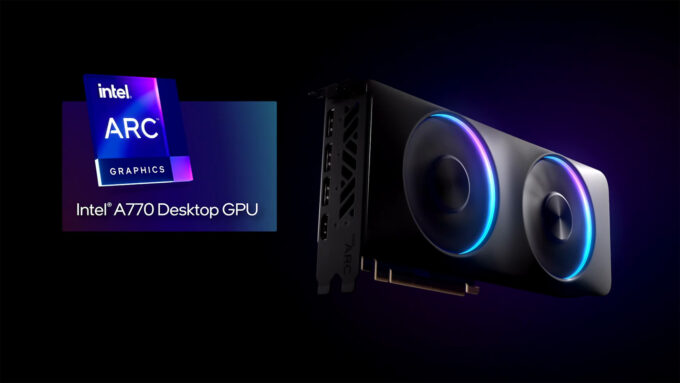 What’s interesting is when you consider that for a couple of years, the low-end segment was largely ignored. When NVIDIA launched its Turing architecture, it took quite a while for GTX-based cards to be released at more affordable price-points, and on the AMD side, its low-end RDNA2 cards didn’t come until a year after the series’ launch. Fast-forward to now, and a third entrant has joined in, offering its lowest-end part (A380) cheaper than the AMD and NVIDIA competitors (RX 6400 and GTX 1630, respectively).

On that note, we’re almost finished with wrapping up our first Arc A380 performance report. Since gaming has been covered well by others, we’re kicking off our coverage with a look at creator performance, so please stay tuned for that. Once we can get our mitts on other Arc cards, we’ll get those tested, and added in. To say we’re intrigued to see the full results is an understatement. It’s refreshing to have a third GPU vendor in the mix now, because it will only make our performance charts even more interesting.