Intel’s Core i9-9900KS To Launch Next Month, Along With New Core X-Series

It’s beginning to feel like hardware vendors are bucking the trend of when and where products are going to be launched. To our recollection, Berlin’s annual IFA event doesn’t typically result in many computer hardware launches, but this year has proven different. Earlier, we reported that NVIDIA announced a Quadro RTX 6000 high-end workstation notebook platform, and not long after that happened, Intel unveiled its own collection of announcements. 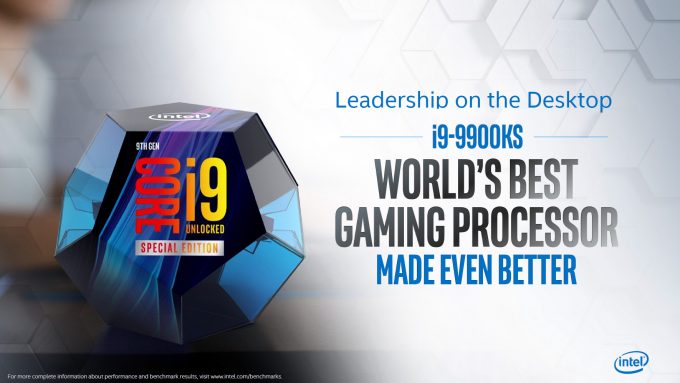 A lot of Intel’s fanfare at IFA has revolved around its mobile processors and platforms, but desktop enthusiasts are not being ignored. First announced at Computex, the Core i9-9900KS is going to become available next month. We assume pricing information will be held off on until then, as we haven’t caught wind of it. Whereas the 9900K peaks at 4.7GHz all-core Turbo (up from 4.3GHz on the 8700K), Intel will peg all eight of the 9900KS’ cores at a clean 5GHz. At briefings held at IFA, the company backed up these claims with a number of benchmarks, including gaming.

A CPU like the 9900KS is going to cater to the hardcore gamer, but for the creator, it’s those bigger CPUs with lots of cores that are more intriguing. Fortunately, Intel also has some new products en route for that segment of the market, with what will become the next-gen Core X-series. Interestingly, the company isn’t calling it 9th or 10th-gen, so we’ll have to wait and see what it becomes.

What’s really intriguing can be seen in this slide: 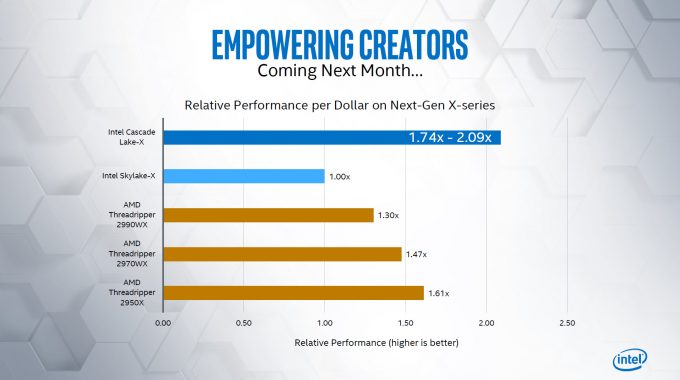 Notice the “relative performance per dollar” at the top of this slide. Since its Threadripper series launched, AMD has been aggressive on pricing, with many hoping Intel would follow suit at some point. It seems like it could be happening here, with Intel saying that Cascade Lake-X will beat out the competition for perf-per-dollar. Considering that the 2990WX is priced well for its performance as it stands today, seeing Intel’s promise here is getting us excited.