Back in May, around Computex time, NVIDIA unveiled its latest range of RTX Studio laptops for creative professionals. This brought a new set of drivers specifically built for designers and artists, but also new reference designs for the laptops themselves, and the introductions of the Quadro RTX 5000 GPU for laptops.

The RTX 5000 isn’t NVIDIA’s top-end Quadro, but there is only so much power you can fit into a little 15-inch laptop, right? Well, as you probably guessed by the title, the significantly more powerful Quadro RTX 6000 will soon find its way into RTX Studio laptops, complete with yet another new reference design called ACE, built specifically to cope with the immense amount of heat these systems can produce.

First we need to clarify that these mobile versions of the Quadros are the same variants as the desktop counterparts, making the Quadro RTX 6000 equivalent to a GeForce RTX 2080 Ti, but with a 24GB framebuffer, and a number of software performance perks. Although the surprise announcement to enable OpenGL 30-bit color support on all GeForce cards does limit the benefits of the Quadro series.

A lot of the RTX studio laptops were built around NVIDIA’s Max-Q philosophy, meaning the most performance for a given power/heat target. This typically meant less than desktop performance by about 10-15%, but the laptops were much thinner and lighter than a desktop, too. The new ACE reference design follows on from this, but with more performance at the expense of a larger laptop (albeit sleight). 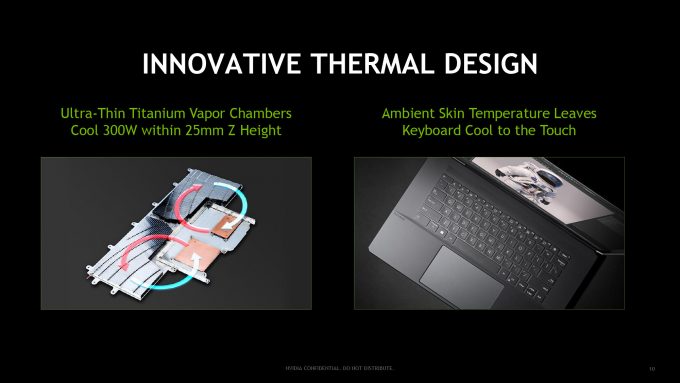 At the center of the ACE reference is a new cooler design making use of a titanium vapor chamber to dissipate the 300 watts of potential heat generated. If you go digging for details on the thermal conductivity of titanium, you’ll be sorely disappointed as it’s about a tenth of aluminum, 22 W/mK compared to 230 W/mK, or 350 W/mK for copper (this all depends on the alloys used). So why go with titanium in a cooler? 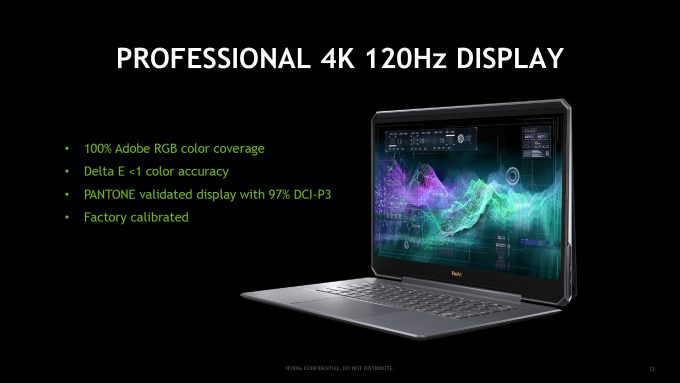 The ACE design goes beyond just the cooling, as it also includes a 120 Hz UHD display, factory calibrated to Delta E <1.0 color accuracy, Pantone validated to within 97% of DCI-P3. Optimus, NVIDIA’s GPU switching system from IGP to discrete GPU to conserve power, has been ‘enhanced’, although little more than ‘faster and better’ was used to describe what this enhanced Optimus actually does that’s different from previous iterations. 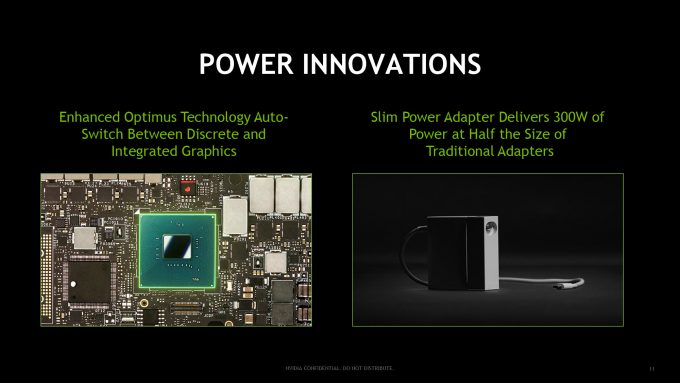 ASUS’ ProArt StudioBook One was shown to be one of the main reference systems that contained everything that NVIDIA was promoting here, which included a new slimline 300 Watt power adapter, measuring 92x92x28mm in size. One of the big criticisms of previous high-performance laptops was that the power brick was practically the size of the laptop itself, so more compact versions are very welcome, and we’re sure not just ASUS will be coming out with these new power adapters.

One of the interesting elements of ASUS’ ProArt StudioBook One is that it’s built more like a tablet, with the motherboard, CPU, and GPU built into the display section, keeping the heat away from your hands while you work. This likely leads to better thermals too, as the entire display can be vented to increase airflow. How top-heavy this makes the laptop when open, we don’t know, but we’re curious to see how this design fares. 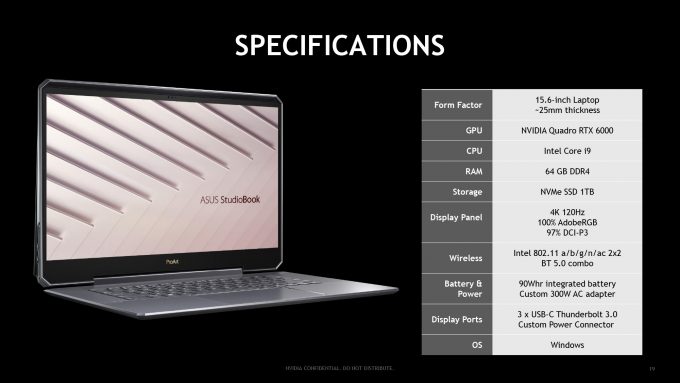 Acer also has its ConceptD Pro series, which uses a more traditional laptop base with the keyboard on top of the motherboard, but the display is hooked up with a hinged system, allowing you to slant the display when working with a stylus.

Prices for these new ACE laptops are not going to be cheap, considering that a Quadro RTX 6000 costs over $4000, add in the new cooler, calibrated display, high-end CPU, miniature power packs, don’t be shocked if we these systems running at the $7000 mark or more.