As part of the deluge of Computex announcements incoming over the next week, NVIDIA will be expanding its mobile RTX GPUs with workstation focused models, including a new 16GB VRAM mobile Quadro RTX 5000 GPU. This also ties in with a new mobile platform which NVIDIA will be calling RTX Studio.

RTX Studio laptops are a new program by NVIDIA that specializes in laptops built and tuned for workstation environments. These are systems that have been built and thoroughly tested against a broad range of software to maximize stability and performance. There are strict system requirements that need to be met to be eligible, including the need for an RTX 2060, Quadro RTX 3000 or higher GPU, a Core i7 H series CPU or better, 16GB+ of RAM, 512GB SSD, and a 1080p or 4K display. The RTX Studio laptops will also have NVIDIA’s Max-Q design philosophy as well, maximizing performance based on power and thermal constraints. 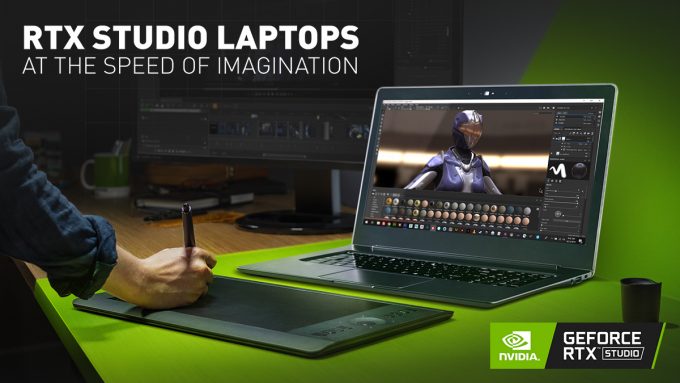 Remember a few months ago NVIDIA released the Creative Ready drivers that were meant to be the workstation equivalent of the GeForce Game Ready drivers? Well, that name has been scrapped and will now be Studio drivers, to tie in with RTX Studio laptops. Nothing about the drivers will change, just the name. These Studio drivers will also be made available through GeForce Experience too, allowing users to switch between the Studio and Gaming drivers. NVIDIA still recommends creators that game to use the Studio drivers though, as they contain all the game optimizations found in the GeForce drivers.

On the software side of things, the performance aspect and compatibility will mostly target many of the familiar names, such as Adobe, Autodesk, Avid, Blackmagic, Maxon, Unity, and Epic. It’s worth pointing out now that GeForce RTX Studio GPUs will not have the same software acceleration as the Quadro drivers, such as with SolidWorks, Siemens NX, and PTC Creo. Studio drivers are NVIDIA’s high stability release, but Quadros will still be required for enterprise features and ISV certifications.

NVIDIA spent a bit of time exploring some of the software being released for designers and creators, that will make use of the RTX features, including both the RT and Tensor cores, as well as many of the additional bonuses featured in the Turing architecture. Much of this follows on from what we saw and NVIDIA’s GPU Technology Conference (GTC) a few months ago. 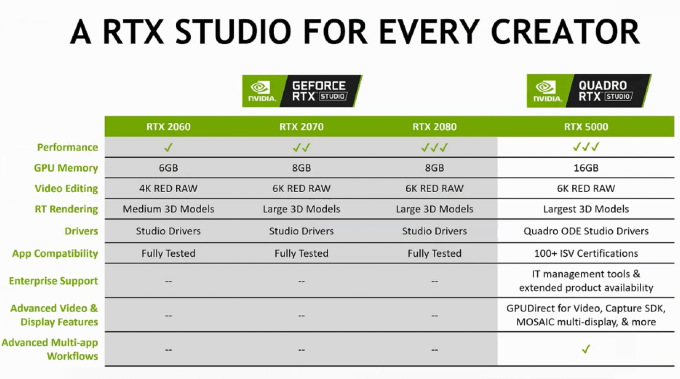 Autodesk’s default rendering engine, Arnold, recently received GPU acceleration, something we tested out not long ago. While still in beta and many quirks to iron out, it’s one of many rendering engines that’s forgoing CPU rendering for much faster GPU renders. That’s not to say it’s a full replacement, as very complex scenes requiring 100GB+ of memory will still need CPUs, but for rapid design, GPU renders will save a huge amount of time.

Adobe was brought up too, leveraging Lightroom’s AI enhancement capabilities to extract detail from blurred images. This is something we’ll have to explore in more detail in the future. What became apparent though was the comparisons that NVIDIA chose to showcase RTX’s prowess, namely how it’s RTX Studio 2080 and Quadro RTX 5000 Max-Q GPUs compared to Intel’s IGPs, and more importantly, the MacBook Pro Vega 20 equipped laptops.

Why this is interesting is simply because NVIDIA has no driver support for its hardware on MacOS, and this may be NVIDIA’s not so subtle way of telling Apple it has superior GPUs for mobile workstations.

Blackmagic Design was up next in the showcase. The DaVinci Resolve video editing suite has had a bit of a reputation, not just for its industry leading color grading capabilities, but its ability to leverage GPUs for more than just rendering, to the point of being able to use multiple GPUs under select circumstances. More recently, it’s introduced a number of features built to leverage the power of NVIDIA’s Tensor cores; including AI inferencing for frame interpolation, superscaling, auto color matching, facial recognition, and artistic styling effects.

There’s a bunch of software coming out over the next year with RTX features, from the likes of Daz3D, Octane Render, RedShift, V-Ray, RenderMan, and there’s even been talk of Blender as well. NVIDIA also talked about its work with RED to accelerate not just debayering of 6k and 8k video, but also real-time decoding of raw video.

On the Quadro side of things, the release of mobile GPUs is something to be expected, but what’s surprising is the Quadro RTX 5000 with 16GB of VRAM, a selling point if there ever was one for a laptop. The full stack of Quadros will be released though, including the Quadro RTX 4000 and 3000, as well as the non-RTX T2000 and T1000. On the very low-end is updated Pascal GPUs in the form of the P620 and P520, which are more powerful updates of the P600 and P500, respectively.