Josh Wise Places 20th in Talladega with His Dogecoin Car

Last Monday, I wrote about the impressive feat that Reddit’s collective Dogecoin supporters managed, which was raising over $50,000 in order to sponsor Josh Wise in the Aaron’s 499 NASCAR race in Talladega. Well, this Monday (which is today, for those unaware), I’m happy to follow-up and be able to write that Wise placed 20th – his second-best Sprint Cup finish ever. Interestingly, his best-ever finish was 19th, at last year’s Aaron’s 499.

Wise’s 20th place finish might be in the middle of the pack, but for Dogecoin fans, it wasn’t the finish that mattered: It was the publicity. And it certainly got it. During Wise’s pitstop, Fox Sport’s commentators took a moment to explain what the livery was all about, and how it came to be:

Fun fact: The Dogecoin car has been dubbed the ‘Dogecar‘. Spelled backwards: ‘Racegod‘.

To say that the Dogecoin community at Reddit was excited about the Dogecar appearance would be an incredible understatement. A quick look at /r/dogecoin can keep you busy for a while. For everyone else, even if you’re not a Dogecoin supporter, there’s no denying that this is a pretty incredible thing to go down. 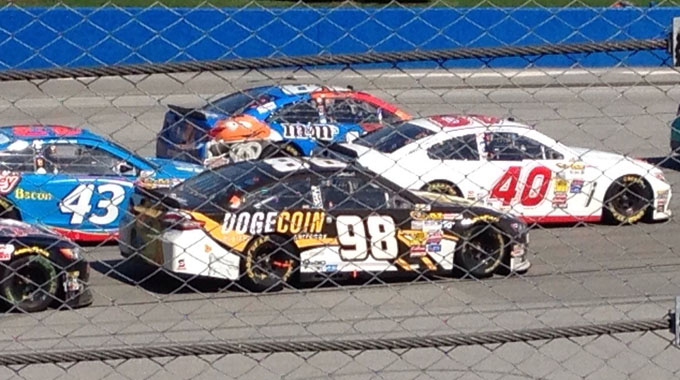 If Wise gets enough votes to drive at the upcoming Sprint All-Star race, we could see the Dogecar again later this month.