It’s been a very busy few years for Khronos Group and its Vulkan graphics API. Three years ago, Valve stunned GDC audiences with the announcement that it had begun work on a Vulkan graphics driver. That came at a time when the industry was only barely grasping what Vulkan was all about, so the move was quite notable. Months later, Google gave Vulkan a major boost when it announced that Android would support the API. Then, after the launch of the 1.0 spec, both AMD and NVIDIA released their first graphics drivers supporting the API.

Since that time, a number of games have adopted the API, either as a supplement, or the primary choice. One example of the latter is with Wolfenstein II: The New Colossus, though despite the support of the cross-platform API, the game is only available on console and Windows – something that also applies to id Tech 6’s other mega-hit, Doom. Select cross-platform games include Dota 2, The Talos Principle, Star Citizen (in time), and Ashes of the Singularity: Escalation.

Today, the Khronos group announced the next evolution of its flagship API, Vulkan 1.1. This update is considered major, but for most end-users, there isn’t anything in particular to look forward to outside of the fact that these refinements should improve adoption of the API. Also updated is SPIR-V, to 1.3, expanding shader capabilities important for both graphics and compute workloads. 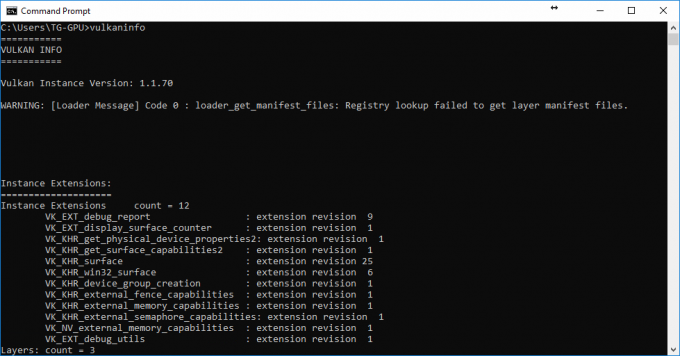 One part of the announcement speaks to us: “use of multiple GPUs in a single system”. At a time when AMD and NVIDIA have put focus for CrossFire and SLI on the back burner, Khronos is talking multi-GPU. I’ve said it before, but we’re at a point in time when multi-GPU is needed more than ever. Maxed-out, Final Fantasy XV tanks on a single GTX 1080 Ti at 4K and ultrawide. Clearly, the game could stand to use some multi-GPU support. This feature isn’t an unknown one to DirectX 12, either, with Rise of the Tomb Raider and Deus Ex: Mankind Divided both supporting multi-GPU. Ashes of the Singularity will even make use of two different vendor GPUs, taking things to the next level.

Ultimately, the Vulkan 1.1 release is a culmination of developer pleas being listened to. Instead of having to use extensions for certain purposes, 1.1 integrates many of them into the new spec. For developers wanting to adopt Vulkan, there’s a bunch of documentation found right on the main site.

Both AMD and NVIDIA have (of course) confirmed their support for Vulkan 1.1, and at least NVIDIA offers that right now for Windows, as long as you’re willing to download a slightly aged driver. Gamers should definitely stick to the latest GeForce WHQL, 391.01, though, since exchanging current optimizations for initial API support (at least in this case) isn’t a good trade.

For AMD fans, it seems that at the moment, 1.1 is available only within the open-source Linux driver, which is still a good move forward. It would not be surprising to see WHQL drivers from both AMD and NVIDIA supporting Vulkan 1.1 within the next few weeks.