Linux Not Booting To A Desktop? Try Disabling The Nouveau Driver

Earlier, I wrote a post about a bizarre Windows 10 install issue on MSI’s X399 MEG CREATION, and as much as I would have loved for that to be the only issue I’ve been dealing with, that’s not the case. At the time the Windows 10 October Update released, it refused to install on the MEG CREATION, as detailed in the previous post. At the same time, Ubuntu suddenly refused to work. Originally, I had thought the issues were connected, but after much time spent troubleshooting, I’ve found out that’s not the case.

To be clear up front, this is exclusive to NVIDIA users, as Nouveau is the open-source driver for GeForce and Quadro. For some reason, current Linux installers seem to hate Nouveau on our X399-based PCs. Yes, that’s plural: both the MEG CREATION and Aorus’ X399 Gaming 7 deliver the exact same issue. In talking to others, I can’t find anyone else dealing with this, so I can’t really blame the platform as a whole, but it’s the only one giving me hassle right now.

Despite using the exact same hardware as months ago, Ubuntu (and others) today require me to boot up with a special flag to disable the Nouveau driver. Fixing this particular issue is as simple as editing a line at the GRUB boot screen, adding nouveau.modeset=0 to the end of the blurb that starts with “linux” (as seen below). If you boot up and see only a purple screen without text, hit Esc as soon as you see it to reveal it. 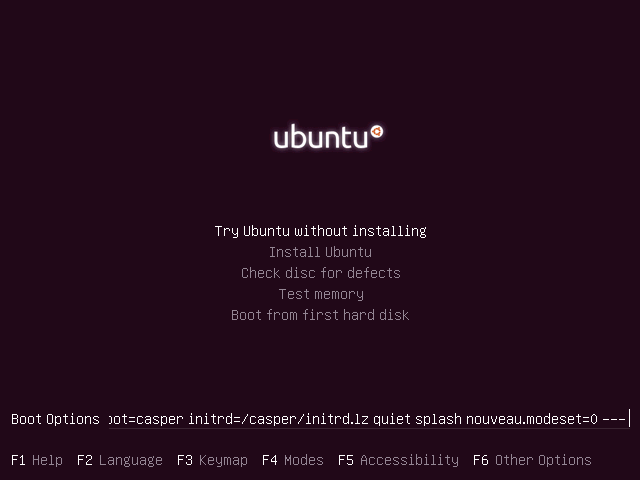 If you see a different screen than this, you’ll probably just have to hit “e” over top of either the “Try Ubuntu” or “Install Ubuntu” options, and likewise add the Nouveau blurb the same way.

With the exact same install media and the exact same GPU, Ubuntu boots just fine on two other machines, but not these X399 ones. Why these Threadripper boards want to throw so many wrenches into my testing gears, I have no clue, but this post helps justify a little bit the sheer amount of time I had to put into getting to the bottom of things.

It could be that I would have found this solution much sooner if not for the fact that I had the other Windows issue to contend with. To experience two completely different but equally work-blocking bugs on the same PC actually bugs me. But I’m at least happy now that I know what’s going on, and hope that this post will help others in the future find a simple fix.

If you install Ubuntu using this switch, chances are it’s going to stick with you after the install, but that’s something that’s proven hit-or-miss for me. If it doesn’t hold, you can simply edit the line again at the GRUB boot screen as you did with the installer. Assuming this means Nouveau isn’t going to agree with you, you’ll then want to opt for the proprietary driver. You could do that by simply running sudo apt install nvidia-384, or going more modern and adding the graphics drivers PPA:
sudo add-apt-respository ppa:graphics-drivers/ppa
sudo apt update
sudo apt install nvidia-driver-415
You might need to use the PPA if you decide to upgrade to a newer kernel. I’ve tested the 415 driver on kernel 4.19, and it’s worked great.

And with that, I hope I am done with nonsense issues for a while. To say it cuts into productivity would be an incredible understatement.