At last year’s SIGGRAPH, you couldn’t walk far into the halls without spotting some sort of support for NVIDIA’s RTX, which had only been announced at that show. Since then, a lot has happened, and for the better, with more and more software vendors opting their support. That even includes the gaming side, with E3 in June having resulted in a number of new RTX-supported titles being announced.

We wrote earlier about Blender’s support for RTX, which is going to include use of both the RT and Tensor cores. For myriad reasons, this move is notable, but we admit that we’re even more surprised at Luxion’s adoption of the tech. The reason is simple: Blender has supported GPUs for quite some time, whereas it’s brand-new territory for Luxion. How times can change. 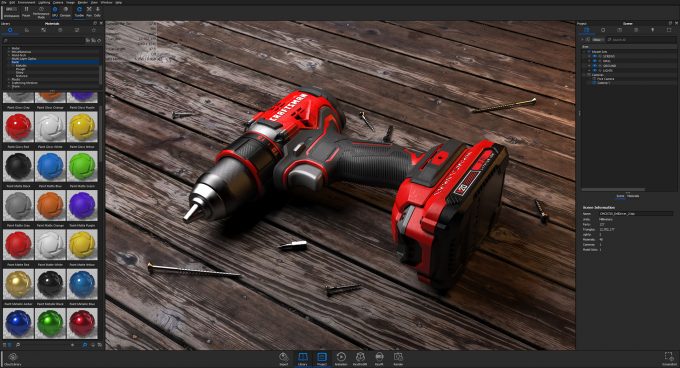 It’s one thing to adopt GPU rendering after having focused around the CPU for an eternity. We’ve seen it with many others, including Arnold, which released its first GPU-powered plugin a few months ago. But Luxion didn’t just go that far; it jumped right into the deep-end with RTX support.

When KeyShot 9 becomes available, users will be able to quickly change between the CPU and GPU with a toggle found at the top. Denoising will be made available through an Image Style, which means it can use the Tensors for inference while the RT cores handle the rays.

We haven’t been able to test KeyShot 9 out yet, but it feels to us that if the GPU does the same job as the CPU, then it’s going to end up doing it a lot quicker in the end. But, because KeyShot has focused on CPUs for so long, it could be that many of its customers will continue to see better performance with their big CPU for now. These are ponders that will be tackled in our future benchmarking.

Where does this leave AMD? Well, on the CPU side, we’ve seen KeyShot take extremely good use of Threadripper, so the company is sitting pretty there. But for GPU, NVIDIA will dominate since AMD’s ray tracing support is currently nonexistent. We’re eager to see what kind of quality we could get from a modest RTX card vs. modest and high-end CPUs.

Luxion says that KeyShot 9 and its RTX support will be available this fall.