We’ve already talked about Microsoft’s announcements revolving around updated Surface Pro and Surface Laptop models, but that’s far from where the company’s reveals have ended. At its New York press event, Surface creator Panos Panay said that he and the company didn’t know how to even talk about the Surface Neo and Duo, so they just let loose with teasers of what they want them to be. And, for being a full year out, what we’re seeing today seems really refined. 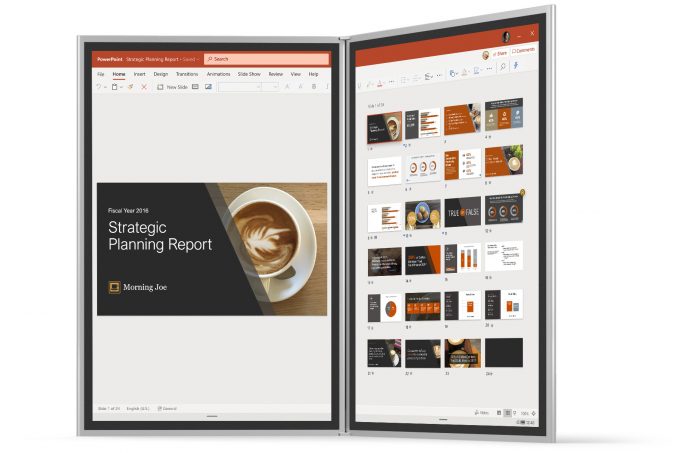 If Samsung didn’t solidify the fact enough with its Galaxy Fold that dual-screen devices are going to soon become a lot more common, Microsoft adds its assurances that two screens is a great way to take the next step in our computing evolution. If you ask anyone who uses more than one monitor with their desktop PC if they like it, you’ll rarely hear anything other than “heck yes” or some variant of.

The Neo is meant to be a truly portable Surface, and should feel like one with its next-gen Intel CPU under-the-hood. It’s super thin, and offers wider screens than what we’ve seen with the Galaxy Fold, but that’s largely to do with the fact that it’s not a phone. It’s effectively two tablets in one, with an OS finely tuned for the device. That finely tuned OS is Windows 10X, an “expression” of the full Windows 10 completely optimized for dual-screen PCs.

On stage, Panay had no qualm constantly folding the Neo, subtly instilling confidence that we’re not going to see build quality concerns with this dual device. Surely, it’s easier to create a dual screen device rather than a dual device with a single screen, so on the durability front, we’re really liking what we’re seeing here. That includes the ability to clip a keyboard on for more improved writing, if you are only toting one device around with you.

As if the Neo wasn’t interesting enough, Microsoft’s Duo was a second surprise announcement, acting as more confirmation that the company refuses to let go of its smartphone ambitions. With a custom Android OS, this dual-screen phone is going to be designed from the get-go with the Surface ecosystem in mind, so even though the phone will run Android, it should feel familiar, given Microsoft is the one handling the software.

If nothing changes between now and launch, the Duo would be an interesting phone introduction since there wouldn’t be a single screen variant available. It could be that Microsoft wants to try catering to the luxury side of the market first, and then possibly trickle-down from there. Or, we may learn more over the course of the next year.

Overall, this is quite impressive news from Microsoft, and with these announcements, as well as the new Surface Pro and Surface Laptop 3, the company is beaming with great product momentum right now.