AMD’s EPYC Year (So Far): Threadripping To Vega And Back

When AMD released its Ryzen series of processors this past spring, I didn’t fully grasp the reality that AMD was just getting started. I write this after having arrived back home after a weekend full of AMD events and briefings – activities crammed with so much information, that I could swear I felt some of it begin to seep out as I left the building. AMD sure has a lot going on right now, and it’s downright refreshing. 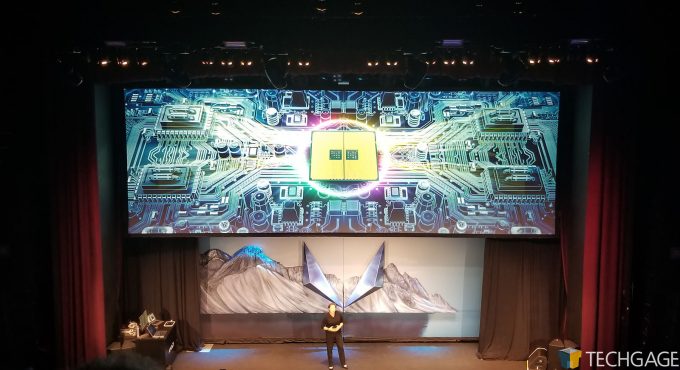 A good sign that things were changing at AMD became clear to me last summer, when the company did away with its FirePro branding, and adopted Radeon Pro instead. Fast-forward to the present, and we can now see that such a branding change had to take place. It feels like we’re dealing with a new AMD, one that got a burst of energy even well into Lisa Su’s reign. The company is fighting relentlessly for marketshare, and its competitors have taken note.

With Ryzen 7, AMD delivered its first truly competitive CPU in nearly a decade, and while it did experience a rough launch thanks to a bleeding-edge platform, the situation has been rectified, and peak IPC performance aside, Ryzen in general is the chip series to beat. In what feels like a direct response, Intel followed-up the Ryzen 7 launch back in June with its own rebranded series, Core X. Intel has got a fight on its hands, and I don’t think it’s been practicing enough.

Intel might have thought that Ryzen 7 would be the worst of its worries over the next year, but this past weekend, AMD decided to one-up the Santa Clara company by offering a 16-core option in the form of Ryzen Threadripper for the same $999 price point Intel’s exclusively occupied for quite some time. 16 cores vs. 10 for the same price? If the platform delivers on its promises, Threadripper could be outright damaging to Intel if word hits the right ears.

Prefacing Threadripper was EPYC, another of the three CPU series based on Zen. Like Ryzen and Threadripper, AMD has aims to get into enterprise customer wallets by offering more of everything: more memory channels, more cores, and more bandwidth.

I am a handful of paragraphs in, and I haven’t even touched on the GPU side of things. That’s also exciting, as Vega marks a dramatic re-entry into the competitive GPU space, and like Zen, AMD has built it to become better over time. While I don’t think the first entrant, RX Vega 64, is going to knock socks off (its performance will be on par with the 14-month-old NVIDIA GeForce GTX 1080), I find myself more intrigued by Vega’s WX series, which just introduced the new top-end WX 9100 and SSG models.

It was well evidenced at SIGGRAPH that AMD takes the developer and content creation markets seriously, and based on chats I had over the weekend, I sense good things for the future with this series. AMD’s off to a good start, at least, boasting a sales boost of 40% on the pro side since the overhauled Radeon Pro series was unveiled last summer. There’s also something to be said about the fact that Maxon has just chosen AMD’s (now) open source ProRender to act as the default renderer going forward.

Beyond all this, AMD has been keeping very active on the driver side of things, with both the Radeon gaming and Radeon Pro workstation graphics cards receiving pretty regular updates, including a major one just last week. And somehow, while all of this has been rolling out, AMD managed to put together a modest server that combined EPYC with Vega to deliver 1 PFLOPS of processing power – equivalent to about 100 top-end graphics cards.

This post is full of praise, but there are also areas I feel AMD could do better, but that might be a topic for a future conversation. All in all, AMD is pushing hard, like it needs to do, and has a huge portfolio at-the-ready to help elevate it back to greatness. It will be fun to watch where the company goes from here.