Here’s something a bit out of left field. It seems that NVIDIA has quietly increased the NVENC concurrent sessions limit from two to three across a range of GeForce cards, adding a bit more flexibility for those who use their GPU’s encoder to improve efficiency. Naturally, the previous limit of two streams has acted as a bottleneck for many, so hopefully this increase will appease those who’ve been previously bitten.

What’s the deal with limits at all? Uncapped NVENC limits is one of the lesser-known perks of NVIDIA’s Quadro workstation graphics cards, so anyone who’s wanted to use a solution like PLEX with virtually unlimited NVENC streams have had to go with a pro card. That said, there have been driver hacks in the past that have unlocked extra streams on GeForce, but we’re not sure how reliable it is. Naturally, nothing will be more stable than the officially supported options. 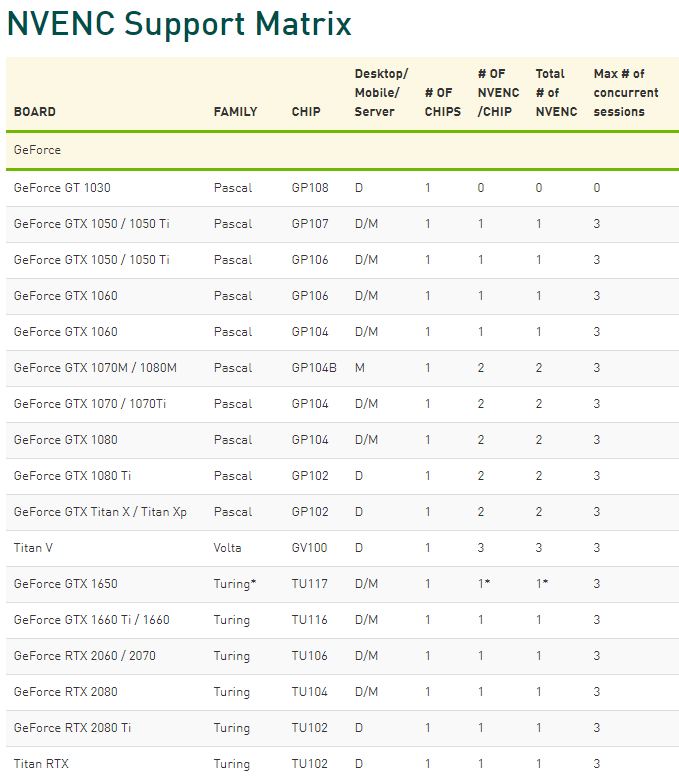 You can get a breakdown of full encoder support over at NVIDIA’s website. You’ll note that the rare GPU model doesn’t include an NVENC chip at all, such as the GeForce GT 1030 and Quadro P500. Meanwhile, the vast majority of GeForce cards now offer a three stream limit, an effective 50% improvement. That’s not going to solve the limitation for some users, but it’s still a nice move, nonetheless.

What we’re not sure of is why NVIDIA decided to make this change after all of this time. We always knew that it was a software limitation, since hacked drivers have unlocked additional streams. We’re not sure how things fare on the AMD side, but to our knowledge, AMD’s limits are higher. With regards to PLEX in particular, though, it’s hard to find concrete information with Radeon use around the web, although PLEX’s support page does hint that full support exists.

Ultimately, this is a small change, but an interesting one for many reasons. If we’ve seen the limit increase once, perhaps we’ll see it increase again down-the-road – although that’d eat into low-end Quadro sales, so NVIDIA would have to have a really compelling reason to pull the trigger again. That said, this isn’t the only move NVIDIA has made recently like this. Last year, it finally enabled full 10-bit color support on GeForce, taking away one of the other perks that used to belong exclusively to its Quadro series.