NVIDIA announced its RTX GeForce series at last year’s Gamescom, and this year, the company has been using the event to talk about all of the RTX gaming infusion that’s coming down the pipe, as well as some cool features being added to the GeForce driver. And speaking of, that new driver drops today, versioned 436.02. You can grab it from the official download page.

New features are just part of this new driver release. NVIDIA is touting some big performance gains here in a handful of titles, including a personal favorite, Forza Horizon 4, as well as Battlefield V, Apex Legends, Strange Brigade, and World War Z. Here’s a preview of the performance improvements, which peaks at 23%: 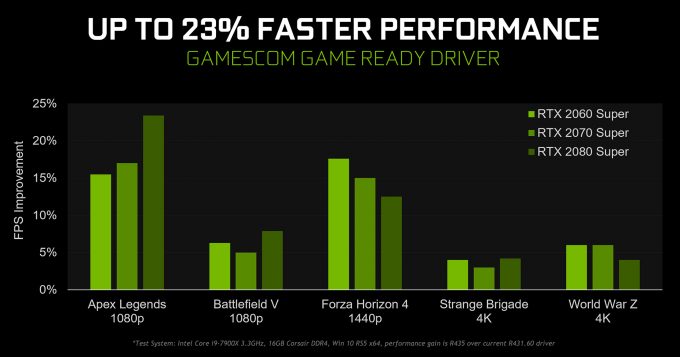 Frame rates are not the only important aspect of gaming performance; so too is latency. When it debuted its Navi-based Radeons, AMD introduced a new low-latency feature to reduce input lag by double-digit milliseconds. Soon after, NVIDIA retorted that its “Maximum Pre-Rendered Frames” feature has accomplished similar things, something AMD has since discounted. Well, apparently AMD’s new feature had some merit, because we’re seeing the same thing implemented in the new GeForce driver.

When this new ultra-low latency mode is enabled, the driver adjusts to ‘just in time’ frame scheduling, so the CPU will submit frames just before the GPU needs them. This change can reduce latency “up to 33%”. We’re sure this feature will be tested to oblivion against AMD’s own. NVIDIA’s driver is even getting a new sharpener feature as part of its FreeStyle feature. It seems like in the past couple of years, the number of gaming enhancement options has been really kicked up a notch.

So, what about better scaling? We saw that Intel has begun to take integer scaling more seriously, and now, NVIDIA has decided to introduce its own implementation in the latest driver. This means that native content run at lower resolutions can be scaled up naturally via a nearest-neighbor method. Scaling will occur without blurring, but because of the nature of the beast, you’re almost guaranteed to see black bars around your content in this mode. The goal with integer scaling is preservation of the details, not enhancement.

For an explicit example of where integer scaling can help, NVIDIA provides one of FTL: Faster Than Light: 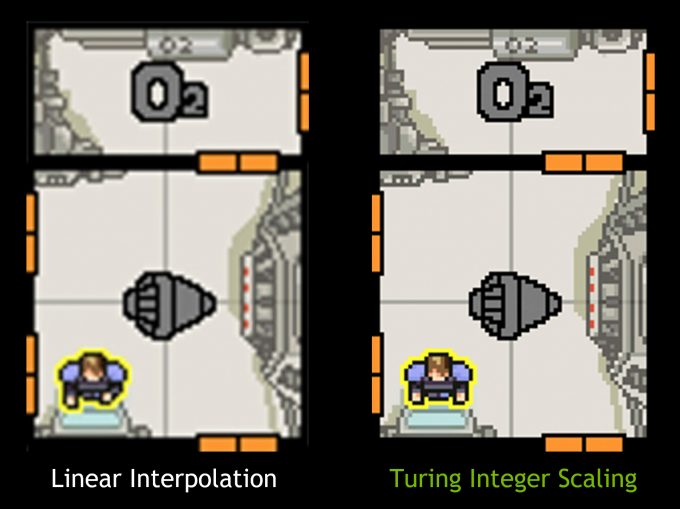 Following the announcement of NVIDIA’s 30-bit color support in its Studio Driver a few weeks ago, we’ve been trying to get an official word out of AMD on its own support. If you Google around, it becomes extremely confusing very quickly, with a lot of FUD around. If blanket 30-bit color support isn’t in AMD’s gaming drivers right now, we’d be surprised if it didn’t change over the next few months. 30-bit OpenGL used to be a workstation GPU luxury, but it’s quickly changing.