As more games featuring support for NVIDIA’s DLSS (deep-learning super-sampling) roll out, the technology continues to get even better. That’s always been pretty obvious, but when Tom Clancy’s Rainbow Six Siege received its DLSS update not too long ago, the fact that you are able to take the latest DLSS DLL file (nvngx_dlss.dll) and import into previously-released games started to become better known.

As soon as Siege was updated, there were reports around the web that using its respective DLSS DLL in previously-released DLSS games would instantly improve the end result, including Cyberpunk 2077. Recently, and as we’ve already written about, the new LEGO Builder’s Journey supports ray tracing, and includes a very recent version of the DLL, while the latest Rust update pushes it ahead once again, to version 2.2.10.

As VideoCardz reports, if you take a newer DLSS DLL and plug it into a game with an older version, the differences should be pretty easy to spot. Take a look at this screenshot, derived from a new Digital Foundry video: 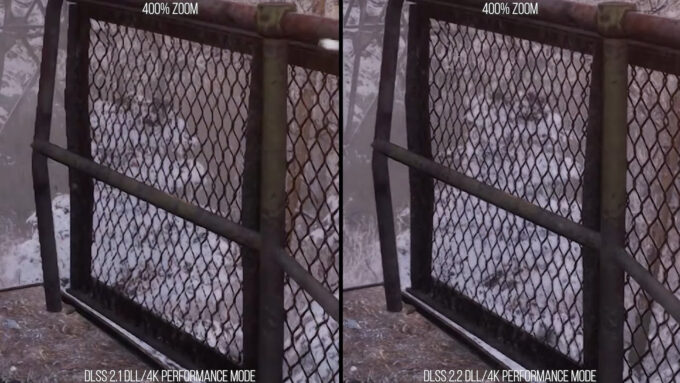 As you can see, DLSS 2.2 renders a much cleaner result of this fence than 2.1 does, despite it being just a single version different. This isn’t the only good example, either; others are shown at the link above for Cyberpunk 2077 and Death Stranding. The improvements delivered extend beyond cleaner final frame renders, as it’s also able to noticeably reduce ghosting.

From all of the discussion we’ve seen around the web from those who’ve imported newer DLSS DLLs into older games, there doesn’t really appear to be any downsides to doing so. If you want to give this a go yourself, simply grab the DLL from a newer game, and overwrite the one in the other game’s folder. If you don’t have the latest game to gain access to the newest DLL, then you can likely source it elsewhere on the web – but as always, exercise caution when downloading it. 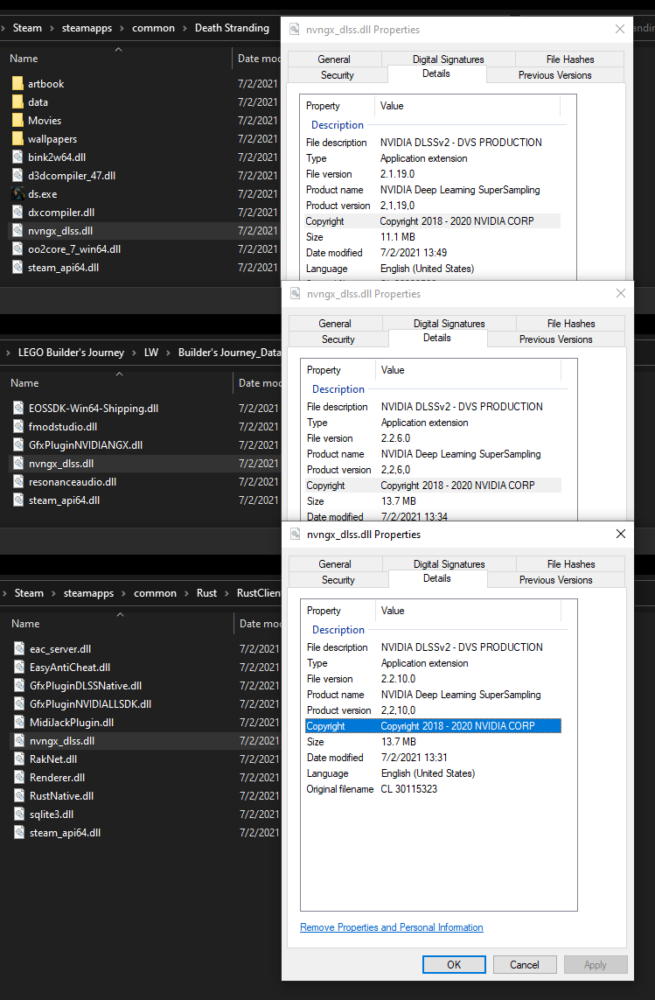 Example of finding which DLSS version a game includes

As mentioned above, the DLSS DLL file you want is named “nvngx_dlss.dll”, and the shot above shows you where it’s generally located in a game install folder. By right-clicking the DLL and going to its properties, you can hit the Details tab up top to see which DLSS version that particular DLL represents.

We’re not entirely sure that new DLSS DLLs will instantly work with all previous DLSS games, but we’d assume any that included at least DLSS 2.0 is probably safe, so it’s definitely worth giving a go if you want to try improving your DLSS experience.