Hot on the heels of the launch of NVIDIA’s fourth Turing GeForce, RTX 2060, we’re seeing rumor of the company’s possible next GPU, and boy are things getting complicated. Before the new year, rumor hinted at the fact that a GTX 2050 would launch after the 2060. But perhaps it’d be called the GTX 1150, or even 1150 Ti. Now we’re getting hints of an even more oddly-named card.

Over at VideoCardz, leaked performance from one of the most popular gaming benchmarks has been discovered. I’m of course talking about Ashes of the Singularity. 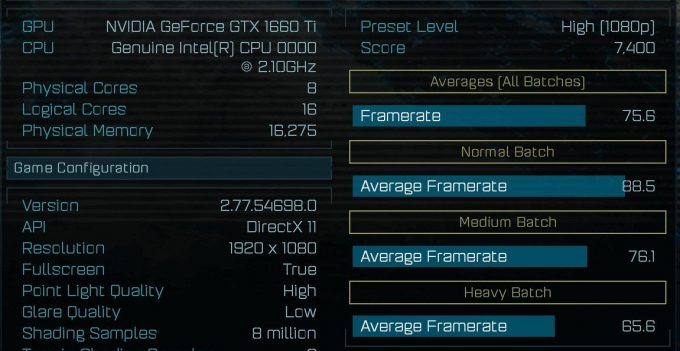 The GTX 1660 Ti is allegedly 1,200 points faster than a GTX 1060, but as has been proven by AOTS leaks in the past, they’re not always worth putting a ton of faith into. NVIDIA could very well optimize performance yet again by the time the card launches, although it’s hard to say how much improvement a modest GPU is actually going to gain.

What I find a little interesting is that not even the CPU is reported properly, suggesting someone is using an engineering sample, and even more likely, that the person leaking this works for a manufacturer. Because it’s an 8-core offering 16-threads at a base clock of 2.10GHz, it seems likely that this platform is a laptop, which thus suggests the 1660 Ti could be bound for mobile.

Either way, the name GTX 1660 Ti is surprising, but the card itself has been expected for a while. It seems like NVIDIA has wanted to get the rest of its Turing lineup out the door before moving onto these oddly-named follow-up cards. And if GTX 1660 is true, it basically confirms that there would be no GTX 2050.