After spending a day being briefed on NVIDIA’s newest GeForce family, based on the Turing architecture, NVIDIA decided to let us reveal some interesting information. The kind of information you’re probably really wanting to see: actual gaming performance. Or, at least projected gaming performance. We’ll be taking a deep look at GeForce RTX in time for launch, but as that’s weeks off, this will have to do for the time being. 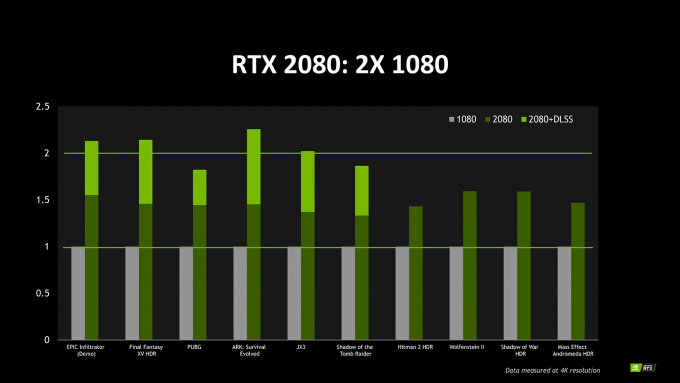 As the title of the above slide suggests, the RTX 2080 is, in some cases, offering 2x the performance over the GTX 1080 – if we’re dealing with AA. With the new DLSS (deep-learning super sampling) AA mode, NVIDIA used deep-learning to train an anti-aliasing model for game scenes as part of its NGX system, and uses the resulting neural network to deliver super high quality AA with minimal performance impact, as a post-processing effect.

So… 2x performance is a big claim. How could that be? It’s of course thanks to the Tensor cores. With the Tensors inferencing the aforementioned models, you can gain the appearance of an extremely high AA modes with a lot of the load being lifted off of the CUDA cores, thanks to the Tensors. That should mean that games you currently play with AA should perform better than what you currently see, once deep-learning gets involved.

Unfortunately, DLSS requires game developer to spend about a day integrating it into their title (as part of Game Works most likely), so hopefully we’ll see more titles added to this list as time goes on (we almost assuredly will). But for the long list of existing titles, this will have no impact, so we’ll be stuck with the usual ‘publisher’s discretion’.

For an even better performance look, here’s what GeForce RTX could deliver across a handful of titles: 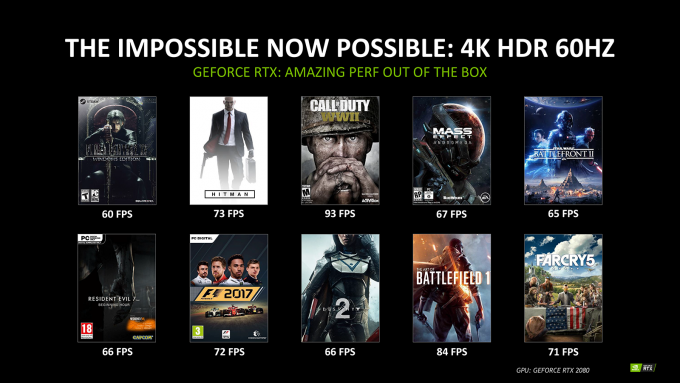 It’s important to note that all of these games were tested at 4K resolution, and includes use of High Dynamic Range. These numbers do not, however, represent use of the special RTX features involving ray tracing and tensor cores, but instead the primary FP32 CUDA cores that the majority of games will use. Still, across all of these top titles, hitting 4K/60 isn’t a big issue. The TITAN Xp could have been considered a great 4K graphics card, but RTX definitely displaces that.

Aside from performance, NVIDIA also let us talk about some new GeForce Experience features, such as Ansel RT and Highlights. We’re a bit of a fan of Ansel here, mostly because we love taking screenshots of epic scenes in our games. NVIDIA’s Ansel was like giving gamers a free-roaming camera which they could pull out in the middle of a  session and line up the perfect shot, complete with aperture, focus, color filters, and now, ray tracing. 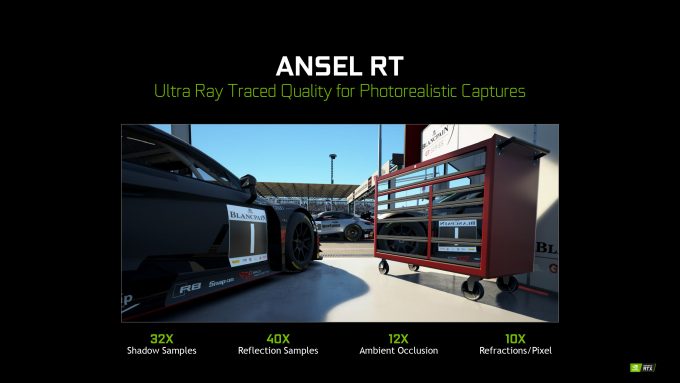 The new Ansel RT mode takes the usual Ansel features and throws in an extended set of ray tracing features beyond what the game could render in real-time. This lets you apply multi-bounce sampling for shadows, reflections, ambient occlusion, and refractions, up to 40x normal. It will even apply the AI-field upscaling too, for higher fidelity. It can even apply a greenscreen to skies so you can chroma-key your own background. An interesting aspect is allowing non-Ansel SDK-enabled titles access to, at least some of, the screenshot features. Although all of this does raise the question of realistic game previews in the future, but to be honest, game previews have always aired on the side of fantasy.

Of course, we’ll be taking a deep dive into these features, and more importantly, the performance, of these new GeForce RTX cards as they are made available. And be assured we’ll look at the actual impact on existing games, not just the ray traced enhanced new ones, plus more than just games if we get the time. It’s a big leap in technology, so it’ll be interesting to see how this all plays out.