NVIDIA has today launched its fifth Ampere-based GeForce, the RTX 3060. This card is interesting in a number of ways, with one of the most notable being the fact that it includes 12GB of memory. For gamers and creators alike, that’s a lot of breathing room, although the saving grace of the bigger cards with less memory is that their bandwidth is better overall (3060 Ti is 256-bit memory; 3060 is 192-bit).

As covered before, the RTX 3060 has a trick under its sleeve in the form of crippled mining performance. You would have to be living under a rock or super-glued to your favorite MMORPG to not realize that GPUs and CPUs can’t stay on the shelves, so NVIDIA’s catering this particular release strictly at gamers. Time will tell whether or not miners will manage to undo NVIDIA’s protections, although it might take some effort, since it’s a limitation controlled by more than just the driver. 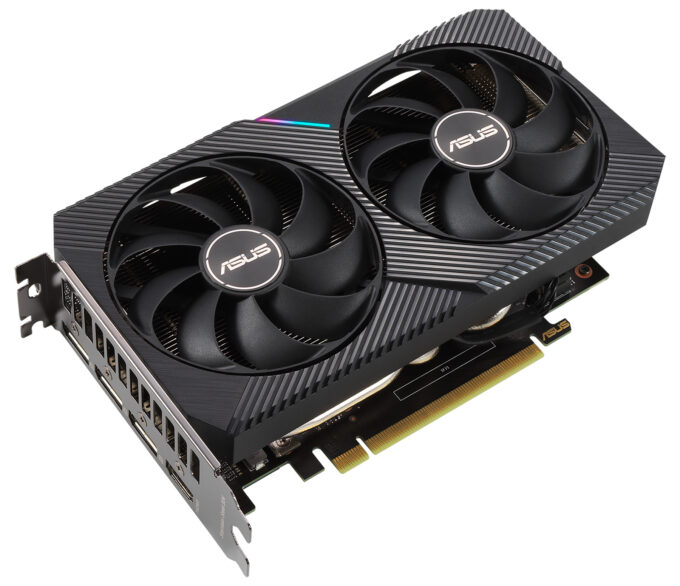 The card you see above the table is ASUS’ ‘Dual’ take on the RTX 3060, which, if it’s not obvious, is much shorter than the other Ampere-based cards we’ve seen so far. NVIDIA doesn’t have an official “reference” model for this launch, but that dual-fan design will be common across different vendor models – although as always, you will have many full-sized triple-fan designs to choose from as well.

The EVGA model we’re currently testing in the lab (seen above) is similar in size to that ASUS one, so it’s a good choice for those looking to add some serious GPU horsepower to their smaller form-factor PCs (we have an almost identical RTX 2060 card in our workstation NUC).

We’re going to be a little late on our look at the new RTX 3060, as we need to get some more competitor testing completed before we can compile the results. We’re also going to be taking a fresher look at CUDA rendering performance with all of the Turing and Ampere cards. On the creator front, we’re also working on an article for the pending Blender 2.92 release, which will include both Windows and Linux performance in the same article, for the first time.

NVIDIA’s pricing the RTX 3060 at $329+, but given the way the market has been lately, it seems highly unlikely that you’ll be able to secure one for that price unless you get really lucky. NVIDIA is having a seriously hard time keeping these new cards on the shelves, and we’re not quite sure crippled mining performance is going to impact that too much here. Time will tell.

You can expect both a gaming and creator look at the RTX 3060 soon, so stay tuned.