At the ongoing SIGGRAPH conference in Vancouver, NVIDIA’s had a lot to talk about – and even released a new Studio driver to help usher it all in.

You won’t see NVIDIA attend a graphics-focused conference and not bring up Omniverse, so no surprise, we’ve learned of a whack of updates from SIGGRAPH. In addition to new USD connectors being implemented (which should be noted as being a big deal), Omniverse gains a number of useful AI-powered tools, and enhances a number of preexisting ones. We don’t hear its name as often as we used to, but PhysX has even been rewarded with serious polish, adding multi-GPU support to deliver real-time accurate material manipulation. 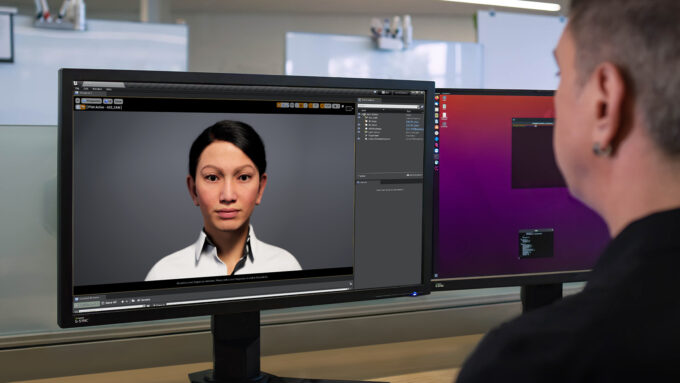 NVIDIA has also bolstered its Omniverse options with Avatar Cloud Engine, a suite of preset AI models for deploying life-like virtual assistants and digital humans. Tying into this, there’s new Audio2Face, which creates facial animations that matches the audio spoken as closely as possible. Then there’s Audio2Gesture, which explains itself quite well.

It’s also worth noting that Omniverse Machinima also gains hundreds of free 3D assets to take advantage of, and DeepSearch becomes available for enterprise customers to help find 3D assets quicker based on specific searches (eg: “red, rusty barrel”). According to the blog post, Industrial Light & Magic has already taken advantage of this DeepSearch feature to better work through its collection of literal hundreds of thousands of assets.

As mentioned above, NVIDIA released a new Studio graphics driver to usher in these Omniverse updates, and according to the driver page, that’s what the entire release revolves around. However, this new 516.94 driver is actually a fairly minor version bump, with 516.93 having been released a few weeks ago. That driver added official support for Chaos V-Ray 6, which we took an in-depth performance look last week.

We’re actually in the middle of testing with this new Studio driver, for an upcoming look at current viewport performance (inspired partly by a fresh update of SPECviewperf), so stay tuned for that.