At the International Supercomputing Conference, this year held digitally (surprised?), NVIDIA pulled the veil off of the PCIe version of its Ampere-based A100. Like the A100 for NVIDIA’s HGX platform announced during its digital GTC, the A100 for PCIe sports the same GPU, but comes with a note that users should only expect to see about 90% of its peak performance vs. the SXM4-based HGX version, due to power limitations.

Here’s the card in all of its glory: 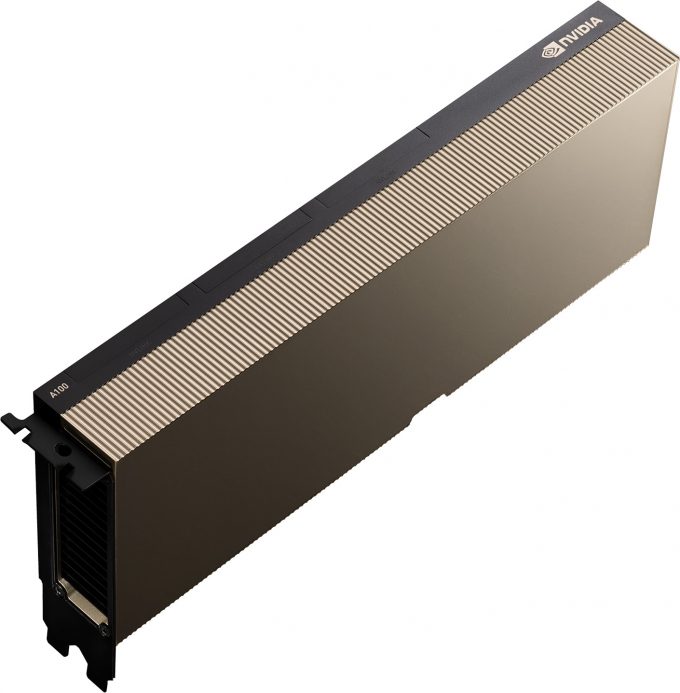 You really can’t get much cleaner than this A100. It’s completely passive, and its shroud is just one color, with a ridged texture on the top. Because this is designed for AI work primarily, there are no video outputs at the back. This A100 still features NVIDIA’s MIG (Multi-instance GPUs) feature, however, which would allow one card to be split up into seven instanced GPUs that lets everyone tap into its power when needed.

As the table below will make obvious pretty quickly, both of the released A100s are spec’d almost identically, with performance numbers shared across-the-board. That said, those top-end specs would only apply if there were no such thing as PCIe power limitations. The A100 found in the HGX will suck down 400W, while the PCIe variant has to sit at 250W. If there’s only a 10% performance drop from a 150W power drop, then that’s really impressive.

The announcement of NVIDIA’s new PCIe A100 comes with news that over 50 A100-powered servers are expected this year, with 30 of them due in the summer. Mentioned vendors include ASUS, Atos, Cisco, Dell, Fujitsu, GIGABYTE, HPE, Inspur, Lenovo, One Stop Systems, Quanta/QCT, and Supermicro.

We’re not sure on how the A100 PCIe will be priced, but we’re sure if you employ enough deep-learning, you could probably conjure up a realistic result.