By now, you should know what NVIDIA’s ION platform is all about. Simply put, it’s a platform that utilizes Intel’s Atom processor, but pairs it with NVIDIA’s ION GPU for better graphics support, which would improve HD playback and very light gaming. As you’d expect, between ION and Tegra, NVIDIA had a lot to show off, and I have to say, I like what I saw, but I’ll talk about Tegra later.

What impressed me the most ION-wise was the IPP7A-CP from Pegatron, as it was easily the smallest ION solution on display, and as a result, the most impressive. Just two months ago, Acer announced their ION-based AspireRevo, and when I first saw it, I was impressed. After all, it was a small build, yet offered so much functionality.

After taking a look at the Pegatron offering, the AspireRevo looks a little bit embarrassing, as you can see in the below photo. In a rough estimation, the IPP7A-CP is about 2.5x less the volume of the AspireRevo, but by taking a look in the back, you’ll still see a wide-array of connectivity options. 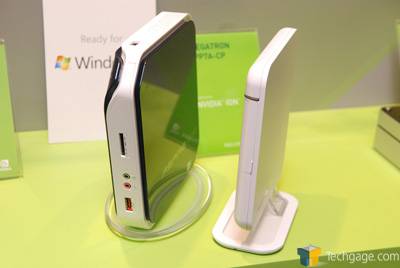 I’m not sure if this couldn’t be done with the straight Atom-based platform (using Intel’s on-board graphics rather than NVIDIA’s), but the fact that we have a rather powerful little machine in a form-factor this small is truly incredible. With the included GPU, you could actually take advantage of HD playback… just imagine this thing next to the TV! No word on release date, but hopefully we won’t have to wait too long.