Oculus Makes A Rift In Your Wallet – Pricing Revealed

We’ve been seeing murmurs of the Oculus rift going on sale soon over CES, but it’s finally happened, we can now tell you the price – not that it’ll do you much good right now, as it’s already sold out. For that next generation experience that we’ve all been waiting for over the last few years, the price of entry will be a rather hefty $599.

So what’s in the box, you ask? One Oculus Rift headset, a head tracking camera, Xbox One controller, various cables, a big old box to hold it all, and two games – Eve Valkyrie and Lucky’s Tale. What’s missing, is the Oculus Touch controller, as that has been delayed until some time in the summer. 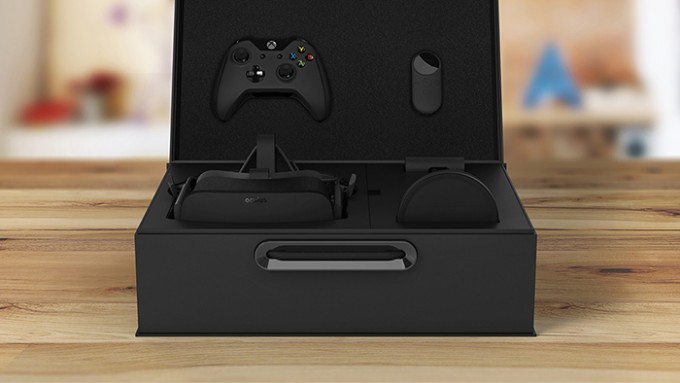 The price might seem a bit steep, but that was set deliberately so. The hardware required to run the Rift effectively, is pretty steep itself, with NVIDIA launching its own VR-Ready campaign to coincide with the launch. The recommended minimum requirements of a GTX 970, plus additional supporting hardware, puts the PC cost at around $1000 as a minimum. While you will be able to get by with less, it won’t be optimal, especially with the requirement of 90 FPS for smooth playback to prevent nausea.

The pre-order is available across 20 different countries, and will change in price to match tax laws and shipping. For those that backed the Rift via Kickstarter, won’t need to pre-order, as they will be receiving one for free (as these people have already received their development kit editions). This is to appease some of the rather unhappy folks when Oculus was bought out by Facebook for a cool $2 billion.

For those with good memories, you might recall that founder Palmer Luckey, stated that the price of the hardware was likely to be in the $200-$400 range – this still kind of holds true, as there is extra equipment thrown into the mix, although $600 is still a pretty steep jump in price, especially for those that may already have a controller.

With the delay of the castAR until 2017, no date for Microsoft’s HoloLens, it’s now down to HTC and Valve with the Vive headset, which we’ll keep our ear out for on price (despite the release date being pushed back further, even for the development kit).