Right on schedule, the folks at OnePlus unveiled their latest high-end smartphone today: OnePlus 8T. Some of the biggest highlights include a fast 120Hz screen (which comes as a surprise to no one, given the company’s own hints), as well as a bolstered 65W charger that can fill the phone’s large battery in just 39 minutes.

The battery configuration in the 8T is an interesting one, because it’s composed of two separate 2250mAh batteries that combine for 4500mAh. Most smartphones seem to hover around 3,500mAh, so this is a huge boost, but something that could prove most useful because of the higher fresh screen. OnePlus says that 15 minutes is all it takes to get a “full day’s power”, so it would seem you could expect at least two days out of a single charge, even as a heavier user.

The 6.55-inch screen itself is pretty interesting, as well, as it’s the first flat 120Hz 2400×1080 display to earn an A+ rating from DisplayMate. It’s also said to be color accurate, with an NCD (Noticeable Color Difference) of 0.3. It also beams with a rating of 1,100 nits, and 8,192 levels of brightness. Did we mention it’s AMOLED? It should be a sharp-looking display.

Naturally, Qualcomm’s latest top-end Snapdragon SoC can be found in this phone, the 865, which includes a Snapdragon X55 modem for 5G (but lacks mmWave support). This solution is bolstered with support for Wi-Fi 6, dual-mode NSA+SA 5G, and UFS 3.1 flash storage for an overall speedy device – which is exactly what OnePlus has been promising.

As for the camera, the 8T has a quad design, with a 48 megapixel camera acting as primary. There’s also a 16 megapixel ultra-wide lens offering a 123 degree view, as well as lenses for macro and monochromatic photography. 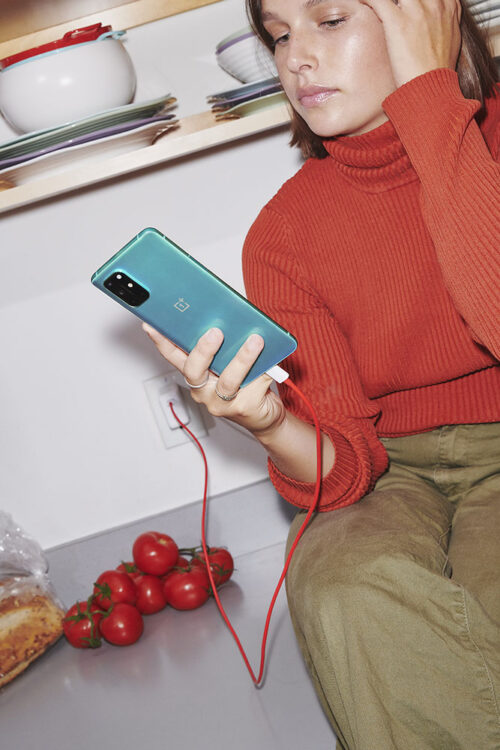 Currently, the 8T is available in two colors: Aquamarine Green, and Lunar Silver, and as the title of this post suggests, it’s going to be selling for $749 USD, or $1,099 CAD. The company says that the phone will go on sale on October 23, at 11AM EDT, with a pre-sale available right now. Not surprisingly, OnePlus has already rolled out its accessories for the device, so you can peruse those right here.