The year has only just begun, but that hasn’t slowed Qualcomm down any. The company today unveils its budget 5G-capable SoC, dubbed Snapdragon 480 5G. Qualcomm says that this release brings forth “series-defying” performance, and we admit it is nice to see 5G hitting lower-end devices, even if current cellular availability isn’t ideal. If you have a 5G device, you’ll be ready for when your area receives support – which will hopefully be sooner than later.

The first 5G-supported Snapdragon Qualcomm released was with the 8-series in 2018. It took only a year for 5G to trickle down to the 7-series, and just last summer, it fell even further to slide into the 6-series. With the 4-series now being augmented with 5G, Qualcomm has really got the bases covered, and gives vendors far more consumers to target with 5G than before. To that end, Qualcomm says its 5G devices are accessible to over 3.5 billion people, although we’d be curious to know how many have access to 5G wireless itself. 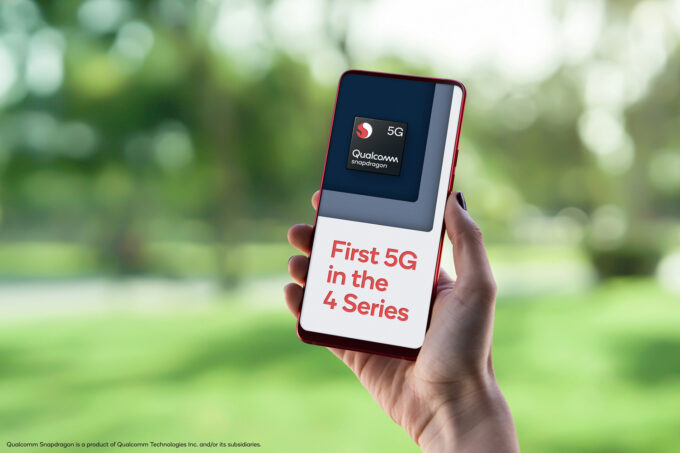 The Snapdragon 480 5G supports both mmWave and sub-6 wireless, multi-SIM, as well as SA and NSA modes, TDD, FDD, and Dynamic Spectrum Sharing. Compared to the last-gen Snapdragon 460, the 480 5G upgrades the Adreno graphics chip from 610 to 619, and also bumps the Kryo CPU from the Cortex-A73 based 240 Gold to the Cortex-A76 based 460 Gold.

We can’t seem to find exact performance improvement estimations with the CPU and GPU, but there are a handful of firsts for the 4-series that comes with the 480 5G. That includes full support for 120Hz displays, Quick Charge 4, and 2×2 Wi-Fi 6. 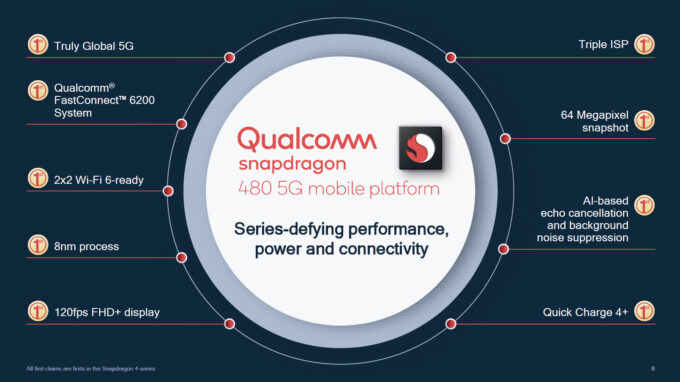 During its presentation, Qualcomm rattled off a number of interesting statistics that are worth mentioning. In between January and August of last year, a total of 1.6 trillion hours were spent on mobile devices, and current projections show that by 2022, monthly data usage will reach 77 exabytes (equal to 77,000,000 terabytes). That data use represents an increase of 171% from 2019 to 2022, a percent that’s expected to inflate to 500% by 2024. Clearly, bandwidth needs are growing at an alarming pace.

To those who sit outside of 5G-supported areas, it might seem like 5G growth has been tepid, but at least where the devices are concerned, adoption has been great. In Q3 2020 alone, 62.7 million 5G devices were sold, representing a 235% increase over 2019. With Snapdragon 480, that’s another percentage that is likely to see a huge bump in the coming year or two.

There has to be reasons behind adoptions like this, and not surprisingly, Qualcomm has some of its theories to share. The ongoing pandemic has increased the need for reliable and fast bandwidth at home, while 5G network rollouts are making adoption more feasible. Then we have the decreasing costs of 5G devices, which will naturally give adoption the jolt it needs. At this point, it seems we are well-covered with devices; we just need to wait for carriers to truly roll out 5G all over.