2020 is quickly shaping up to become the year where 5G hits the masses, as Qualcomm has made yet another announcement that aims to open up the floodgates even more. You might recall that last month, Qualcomm delivered a performance-boosted Snapdragon 768G 5G chip that gives gamers top-rate performance, without having to go with a top-tier 800-series device. Well, as great as it is to see 5G in the 700-series, it’s even cooler to now see it rolled out into the 600-series.

This latest move brings us the Snapdragon 690 5G mobile platform, which, despite being a mid-range chip, isn’t ill-equipped. It fully supports 4K HDR 10-bit, a first for the series, as well as 120Hz for smoother UI experiences. The vast majority of devices on the market remain at 60Hz, but we’re hopeful moves like these will greatly expand the reach, because quite honestly, high-refresh is really nice. 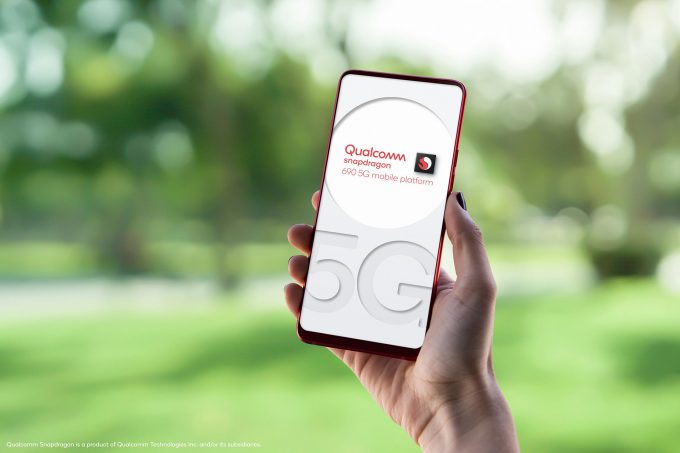 Also equipped under-the-hood of the Snapdragon 690 is Qualcomm’s fifth-gen AI Engine for an (up to) 70% performance improvement with interactions such as AI-based imaging or voice translation. For overall CPU throughput, there’s a 20% gain in performance gen-over-gen, thanks to the upgrade to the Kyro 560. It’s also worth pointing out that the 690 brings the introduction of dual Wi-Fi antennas to the 600-series, along with Wi-Fi 6 features.

The Snapdragon 690 is equipped with the Adreno 619L GPU, which thanks to its updates supports 120Hz at FHD+ resolution, but sticks to 60Hz for higher-end resolutions (eg: 4K). For graphics rendering, Qualcomm claims a 60% performance improvement, which is truly impressive if it’s being compared to the last-gen Adreno 612 found in Snapdragon 675 (but we can’t tell from the product brief).

Naturally, one of the biggest highlights of this release is the fact that it includes 5G support, with SA and NSA modes supported, and touted max downlink speeds of 2.5Gbps (vs. 3.7Gbps in Snapdragon 765G and 7.5Gbps in 865). Like its more powerful siblings, the 690 also offers support for multi-SIM 5G.

When we’ll begin to see Snapdragon 690-equipped phones, we’re not sure, but with many quotes from OEM partners in the press release, we’re hopeful it won’t take too long to see the first phones hit the market.