Announced just last week and recently reviewed, NVIDIA’s GeForce RTX 2060 SUPER and 2070 SUPER will be hitting store shelves and rolled out for wider release. Vendor options including custom coolers will also be made available from the usual companies such as ASUS, GIGABYTE, MSI, PNY, EVGA, and many more..

You can check out our review to get a good idea of what the new cards entail, with the SUPER variants showing between 10-25% performance increases over their non-SUPER counterpart. Due to a staggered release, you can check out how these SUPER cards compare to AMD’s latest Navi launch as well, with our review of the RX 5700, and RX 5700 XT. 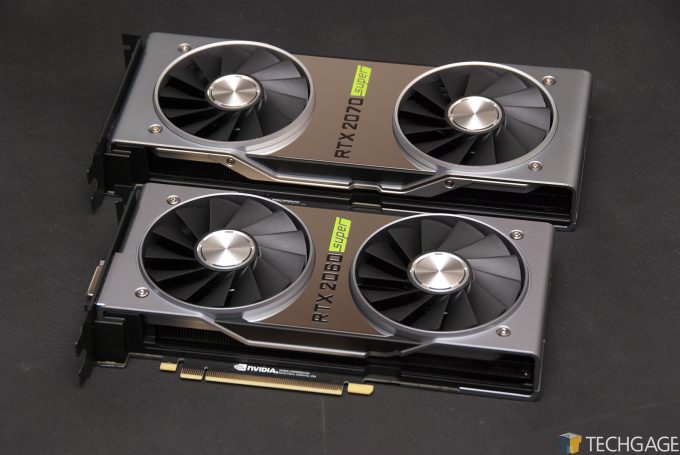 The launch price for the SUPER cards was meant to match the launch pricing of the original RTX cards, replacing the older cards in the process, although the 2060 SUPER will cost more due to the extra 2GB framebuffer. You can check out the full list of available GPUs below. Availability will be a little slow at launch, and prices will be somewhat inflated due to the mix of custom coolers and pre-overclocked models.

NVIDIA is also extending its RTX game package of bundling two games, Control, and Wolfenstein: Youngbloods, to other RTX products in its stack, including desktop graphics, full system which include an RTX GPU, and select laptops too.

As part of the official launch day for the SUPER GPUs, a new driver is released which increases performance in a number of DX12 titles, such as Metro Exodus, Strange Brigade, and Division 2.

While mentioned in the original press release of the SUPER launch last week, NVIDIA will also be releasing its new FrameView tool for performance monitoring of GPUs, including frametimes. In practice though, it’s a front-end replacement for PerfMon, which is used by OCAT and other similar tools. NVIDIA makes getting some of the information a lot easier if you are not familiar with spreadsheet management, but it does throw in power monitoring as well so you can see performance-per-watt metrics. Since it’s a front-end to PerfMon, the tool will work with AMD GPUs as well, but since AMD has rather inaccurate power reporting via its API, the power monitor feature of FrameView will be less useful.

There is still some anticipation for the last SUPER card to come out with the 2080, raising questions about its place against the 2080 Ti.