StarCraft II was launched last week to much fanfare, and though I haven’t heard of any sales figures yet, the game seems to be well-received so far. Well, for those who can play it without their graphics card overheating, that is. Yes, it seems that even the biggest games on the planet can ship with show-stopping bugs, but whether this one is Blizzard’s fault or not is really for you to decide.

As the story goes, an editor at Game Informer was playing his copy of the game while live-blogging his progress, when all of a sudden, his PC crashed. Frustrating as that might be, it was made even worse when he discovered that his graphics card was kaput… it over-heated, and “fried”. Strange things like this do happen from time to time, but what’s disconcerting here is that he’s hardly alone.

The official StarCraft II forums have threads from other users that have had the exact same thing happen. One poor user even lost his GeForce GTX 480 to the game. Apparently, the reason that this can happen is that the main menu portion of the game has no frame cap, and due to its design, it will work your graphics card hard. In some cases, graphics cards can apparently die from this.

It seems strange that an uncapped menu screen could cause such outcomes, but Blizzard itself has admitted that the problem can occur, and recommends that people hard-cap their frame-rates via editing a configuration file. It can be assumed that the next patch for the game will fix this issue.

What’s puzzling is how cards are dying from this, when numerous games out there don’t cap their frame-rates at all. First-person shooters in particular almost never have capped frame-rates, so what’s the difference here? It’s stranger still that of all portions of the game, it’s the main menu that doesn’t have capped frame-rates, but even still, graphics cards should not be killed by this.

Although it’s unconfirmed, it seems that all of the cards that have died are NVIDIA models, so if there happens to be an issue with the company’s latest graphics drivers, it shouldn’t be too long before we hear about it. 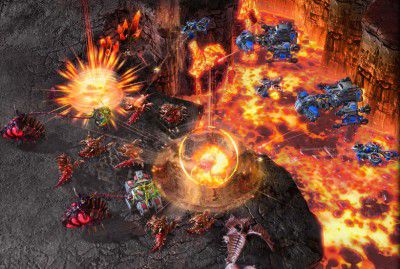 Of course some of the cards may be covered by manufacturer warranties. And while it does appear a bug (uncapped framerates) is partially to blame for killing off the cards, a card pushed to the max would generally not die instantly were it not for poorly engineered and/or defective cooling. It appears that the cards ultimately were done in by the double blow of both a software bug (in SC II) and hardware issues.