Two of the most-anticipated games to come out this fall have just announced their minimum and recommended system requirements: Borderlands 3 and Tom Clancy’s Ghost Recon: Breakpoint. Both Gearbox and Ubisoft have also revealed some of the features we can expect to have control over in the settings. 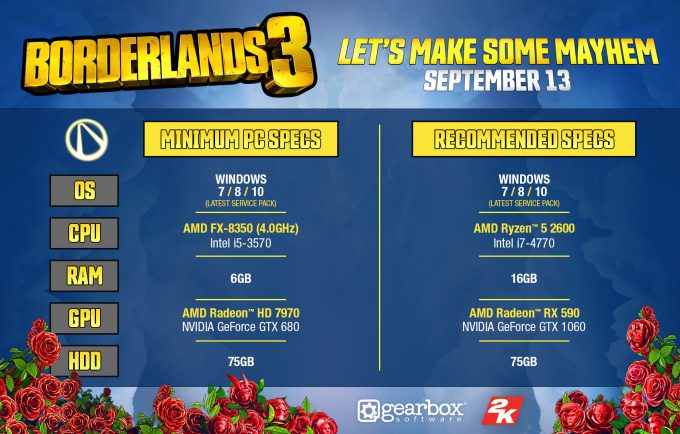 The minimum specs suggest AMD FX-8350 or Intel Core i5-3570 for the CPU, and AMD Radeon HD 7970 or NVIDIA GeForce GTX 680 for the GPU. All of these were released in 2012, so if you have had a high-end rig at any point since then, you’ll know that you can hit at least the minimum. The recommended specs bring us forward a few generations, with CPU recommendations being AMD Ryzen 5 2600 or Intel Core i7-4770, and GPU being AMD RX 590 and NVIDIA GTX 1060.

Gearbox has also revealed the entire settings list, which highlights some serious love being given to the PC version. The entire Borderlands series has always had a decent enough settings menu, but many more options have been added here, and perhaps value levels, as well.

Notably, AMD’s FidelityFX Sharpening has made it into the game, which will not come as a surprise to anyone who watched AMD’s Radeon Navi launch stream in June.

As for Breakpoint, Ubisoft offers five example tiers of performance, with three revolving around the Ultra detail setting. 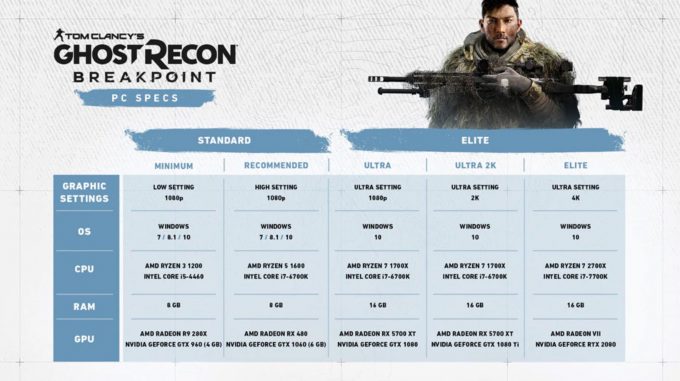 While Breakpoint didn’t get the same settings breakdown Borderlands 3 did, Ubisoft mentions that the game has “full PC optimization”, which includes 4K resolution, uncapped frame rate, ultrawide support, fully customizable controls, eye-tracking with Tobii hardware, and even Discord integration. This game is another win for AMD, as well, as it also includes support for FidelityFX.

Something tells us that both of these games will be fun to benchmark, and we can’t wait for them to get here. Borderlands 3 is slated to land on September 13, while Breakpoint hits us on October 4. Need suggestions on a new CPU or GPU? Check out our most recent gaming GPU review and CPU review to help with that.