The Problem Continues: A Lot of Parents Ignore or Don’t Care About ESRB Ratings

Too often, video games are blamed for real-life violence, as if all it takes is a little bit of inspiration to cause someone to act out a brutal deed. I’ve been a huge Tony Hawk’s Pro Skater fan since the original PlayStation game, and I can tell you one thing: I’ve never attempted to crooked grind along an abandoned sewer halfpipe. Sure – it’s come to mind, but I’ve never followed-through. Because I’d be an idiot, and the mere thought of being crippled is a thought I’ve never enjoyed.

The interesting thing about video games getting the blame for violence is that a lot of the time, it’s parents that are at the forefront of it all. Yet, it’s been proven time and time again that a lot of parents are missing out on one crucial step in their parenting, and that is: parenting – to make the right decision for your kids when they want to make the wrong one. Such as wanting to kill police officers, take part in torture or impress strippers inside of a game like Grand Theft Auto V.

The question is then raised: How are kids getting a hold of a game so mature, it just scrapes the bottom of the ESRB’s Adults-only rating? Their parents buy it for them, of course. 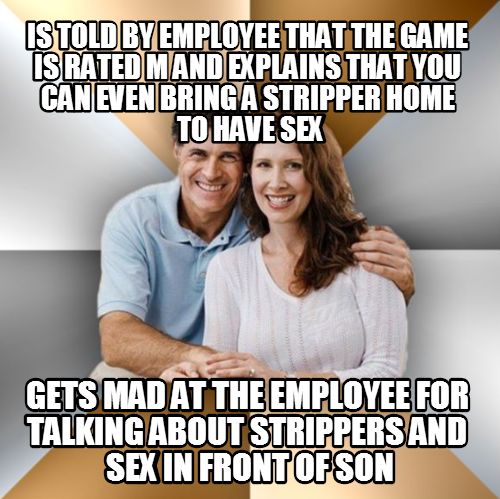 That latter thought is where the ESRB comes in. This is a group that plays through each game in its entirety before it’s given a rating, so as to give parents the most accurate summary of what’s “bad” about a particular title. As the rating scale goes, T is for teens, E is for everyone, and M is for gamers 17 and over.

At this point, “17 and over” is a bit of a joke, as it’s very common for parents to go to a game store to purchase such a title for their child that’s under ten years old. Now, I have to ask, who could reasonably state that such a young mind should be subjected to a game that glorifies violence to the highest degree, and heavily promotes sex, drugs and other adult-oriented material? 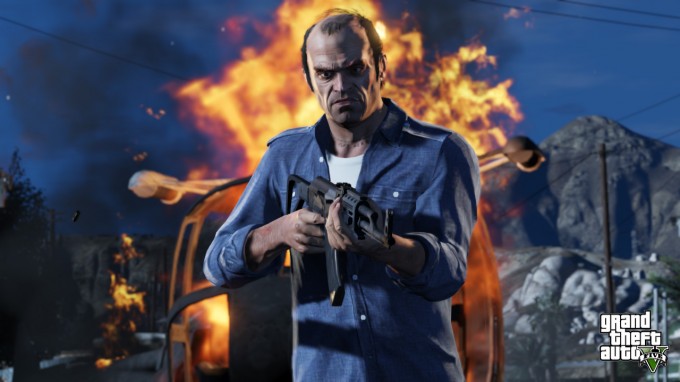 At Kotaku, an anonymous “Video Game Retail Veteran” wrote an editorial which said out of the 1,000 or so copies of GTA V that were sold, about 10% of them were being sold to parents accompanied by a way-too-young-to-be-playing-it child. When this employee tried to give a rundown to these parents about why the game isn’t suitable for kids, he received general statements back like “All his friends have it” or “It’s for another one of my kids”.

Over the course of the past week, I’ve seen many experiences reiterated on Reddit, such as with the meme above, where game store employees actually offended the parents purchasing the game by doing the honorable thing and warning them about what the game entails.

As someone who’s not a parent, maybe this entire scenario seems easy, when in reality it isn’t. I can only imagine having a child that puts up a major fuss because you won’t get them the hottest game going. As a kid, I might have put up that fuss myself. Alright, I would have. When your friends have it, there’s little more frustrating than not being able to get it yourself. But kids lack maturity, and that’s why parents must step in. If they don’t, they really don’t have the right to complain about the detrimental side-effects that video games may cause.