I’m not quite sure what it is, but there seems to be a huge focus on chassis’ at this Computex. Companies who’ve never released such a product before now are, and it’s a bit strange. Is it because they see the need for more selection in the marketplace, or because they know they can do things better? I guess we’ll know once we get some in!

Like Xigmatek and Corsair, Thermalright is also jumping on the chassis bandwagon. For some reason, the R1x (what kind of name is that?) didn’t really impress me from a design standpoint, but I’m willing to wait to see what the final model looks like before forming a real opinion. Like many other chassis on the market, this one features a tool-less design in most areas except for the PCI slots.

Their tool-less method for removing and installing optical drives is actually patented, and though it looks kind of ugly (this IS a prototype though), the functionality is spot on. You simply push the ODD in, push the knob in and turn. Done. 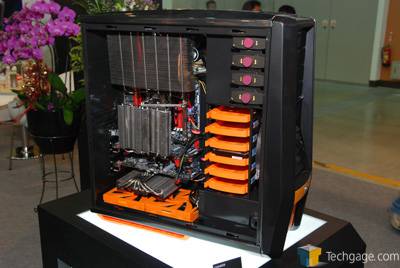 Of course, what was most interesting was the company’s reliance on their passive coolers. Neither the CPU or graphics cards had a fan, so all in all, it should be a rather quiet installation. Except, the company had two fans installed in the bottom, one in the front and two in the top. Seems a little odd to focus on passive cooling with so many chassis fans being used, but it is interesting to look at regardless.