Early last month, TRENDnet began shipping its first 802.11ac USB adapter, called TEW-805UB. Two things were interesting about this: A) it supported USB 3.0, and B) TRENDnet didn’t even have an accompanying 802.11ac router. Well, the latter problem has just been remedied, with the release of the company’s TEW-811DRU, a dual-band ac router that perfectly complements the previously-mentioned adapter. 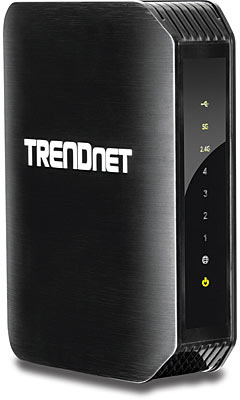 While the theoretical maximum of 802.11ac wireless can extend beyond 1Gbit/s, launch products haven’t yet been able to align with that – the TEW-811DRU is no exception. Instead, it peaks out at 867Mbit/s just like TRENDnet’s USB adapter, which gives us a maximum throughput of 108MB/s. Over wireless, that’s quite impressive, but whether or not many are going to see that in the real-world remains to be seen.

There’s been an unfortunate trend where some products are rated higher than what they could possibly achieve in most situations, so I’m skeptical until I can get some good testing in. Take powerline adapters, for example. While many of these are rated for 500Mbit/s, in my experience I’ve been lucky to see anything beyond 150Mbit/s. While we don’t have TRENDnet’s router here, we do have a WD 802.11ac one, and equipped with TRENDnet’s USB 3.0 adapter, we’ll be conducting some testing in the weeks ahead to see how the performance fares.