A couple of days after the first beta was released of Ubuntu 11.04 (Natty Narwhal), I posted my “First Impressions” on what I thought of Canonical’s ‘Unity’ desktop environment after some light usage. At that time, all of my experience was limited to a notebook that I only use for the lightest of duties, so with 11.04 beta 2 just released, I decided to install the OS on my home machine and take it, and Unity in general, for a real spin.

Something that Ubuntu has done well for quite a while is delivering an easy-to-use installer, but Natty improves things so much, that I couldn’t imagine it being much easier. After choosing the option to install, I had to accept my timezone (which was automatically chosen correctly due to me being online), and then I accepted the option to install the OS along my other ones (I had unpartitioned space on one hard drive, so Ubuntu automatically chose it), and then I had to put in a username and password. What’s the difference between Ubuntu’s latest installer and Windows’? Not much, and in fact, it could be that Ubuntu has the advantage.

The reason is that Ubuntu can download updates and additional media codecs during the install, so the very second after I hit the desktop, media such as FLAC audio and MKV video were fully playable in available players. The install time took a bit longer than Windows, but that’s thanks to the additional downloads that were required.

After hitting the desktop and spending a bit of time configuring things and installing my favorite applications, I was left with this: 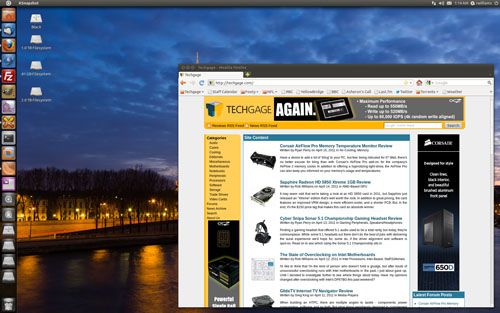 Installing all of the applications I needed couldn’t have been easier, as all but one were found in Ubuntu’s software manager. The one not found there, VMware Workstation 7.1.4, installed just fine with the official installer off of VMware’s website. In addition, because Ubuntu noticed that I was using an AMD Radeon card, I was able to install that drive automatically not long after I first hit the desktop. Due to AMD’s ridiculous driver naming scheme, though, I can’t quite tell exactly what driver version it is.

In general usage, the Unity desktop feels for the most part like I expected it to, although I don’t find its speed to be quite on par with GNOME (2.x) or KDE (4.6) at this point in time (though, the GPU driver might play a part here). Moving simple windows around the screen isn’t as smooth as I’d like, and navigating certain areas can also feel a bit clunky. I even had a couple of occasions where clicking a button in a pop-up did nothing, so I had to use Tab to navigate to it that way and then hit Enter. Fortunately though, the pop-up bubble for finding applications to install and launch, or files to find, both appear quick and are easy to use. 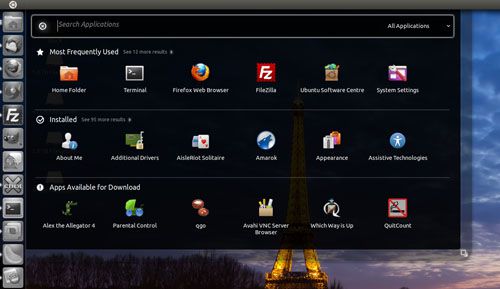 With Unity now on my desktop, being forced to use it full-time has enabled me to see a couple of minor and major issues that I didn’t notice when testing on the notebook. To be clear, some of these bugs may be a result of Natty still being in beta, and it’s my hope that the more serious ones will be ironed out in time for the April 28 final launch.

Similar to most Linux betas, I’ve been seeing a decent amount of application crash dialogs pop up, and sometimes, I don’t even know what application or applet it’s representing. On a similar token, some applications don’t quite cooperate with Unity at this point in time, such as Amarok. While the application itself works well, it’s littered with many broken icons and graphics, because it relies heavily on the desktop environment’s own media icons, which it apparently can’t locate within Unity. 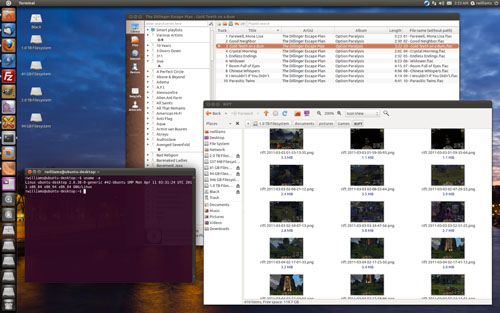 Up to this point, those are the main bugs I’ve discovered, but there’s something else that’s begun to drive me nuts, and sadly, it’s a feature. See the Unity toolbar to the left? Essentially what’s the focal-point of the environment? Well, that can’t be configured or tweaked at all – at least, as far as I can see (Web searches back me up). If there’s one thing that’s going to turn people off of Unity, I think this is it. To even imagine that all users out there are going to be fine with the default configuration is purely asinine.

I don’t have a beef with the toolbar being on the left, and in some ways, it’s more interesting that way. But why can’t I force it to be there all the time – as in, have it act like the bottom toolbar in KDE or Windows where maximized applications maximize as far as they can until they hit it?

Similarly, in applications like Pidgin or Xchat where the program can notify you of a message, the icon will vibrate in order to get your attention. This is fine and good, but it vibrates just once, and if you are looking elsewhere at the time, you are not even likely to know what icon it was that was vibrating. Worse still, you might even get into a habit where you think you saw it vibrate, and check it just in case. If the number of vibrations could be tweaked, the fact that it vibrates at all would be a lot more useful.

Whew, *grabs towel*, that’s enough ranting for one day. As I mentioned, some of these issues might be related to the fact that Natty is still in beta, and despite some aspects of Unity going against the grain more than I’d like, I’m likely to continue using it up until 11.04’s final launch in a couple of weeks. At that point, I’ll re-install the entire OS and see if the bugs I mentioned still exist, and then deliver a final review not long after that. Stay tuned.