Last fall, the folks at UL Benchmarks released a new Wild Life test which catered its performance testing to mobiles – notebooks, phones, and even Windows notebooks. Today, the company has released an update to 3DMark which releases Wild Life Extreme, a test with even beefier settings to better test more high-performance mobile hardware.

The new Wild Life Extreme test is laser-focused on mobile computing, so desktops need-not-apply, as there are more appropriate 3DMark tests for those. With this more comprehensive test, UL is eying the likes of Apple’s M1-based computers, as well as Arm’s Always Connected Always On PCs, such as those infused with Qualcomm’s Snapdragon SoCs.

Whereas the non-extreme version of the test sticks to a 1440p rendering resolution, this new updated test bumps that to 2160p, and adds TAA, DoF, more geometry, more particles, and is restyled – so it’s hardly the same test just running at a higher resolution. UL claims this improved test is effectively 3x more demanding than the original. 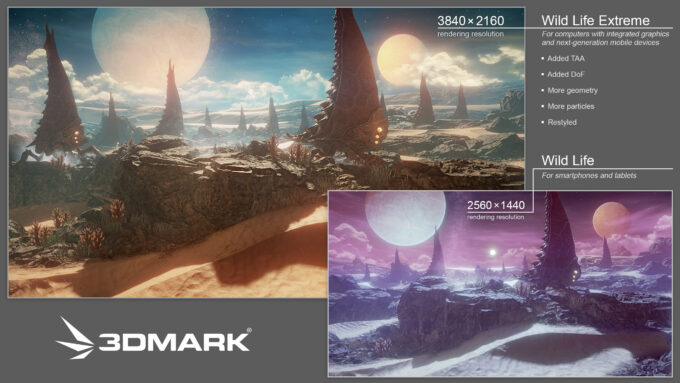 As with the original Wild Life test, this updated one uses Vulkan on Android and Windows, unless we’re talking Arm on Windows, in which case DirectX 12 is used. Metal is used on all Apple devices, including those infused with the new M1 hardware. Also as before, this new Wild Life Extreme test makes sure the device is nice and warm before it generates a result, rather than spitting a result out as quickly as possible from a cold state.

Windows users will require the Advanced Edition of 3DMark to gain access to this new test, but mobile users can grab the latest version from the respective Android or iOS stores to get access quickly. If you want to dig into the nitty gritty more, you can check out the official Wild Life Extreme support page.