After decades of battling with polarized, multi-dimensional USB connectors that never fit the first or second time, the USB Promoter Group has finalized the new Type-C connector to end our frustration. USB Type-C has been in the works for a while, as a way to ‘fix’ the rather annoying problem of the various connector types never fitting, no matter how many times you flip the cable around. The reversible design is similar to that introduced with Thunderbolt, where the connector can be plugged in one of two ways.

The new connector is similar in size to the existing USB 2.0 Micro-B standard (rather than the ugly hack-job that is the 3.0 Micro connector), making it a desirable size for mobiles, while at the same time, trying to keep it robust enough for tablet and laptop use. It will also be compatible with the new USB 3.1 standard that increases bandwidth to 10Gbps. The oddity comes in the form of support for something called USB Power Delivery, which is a new(ish) standard for providing up to 100Watts of power over the USB connection. 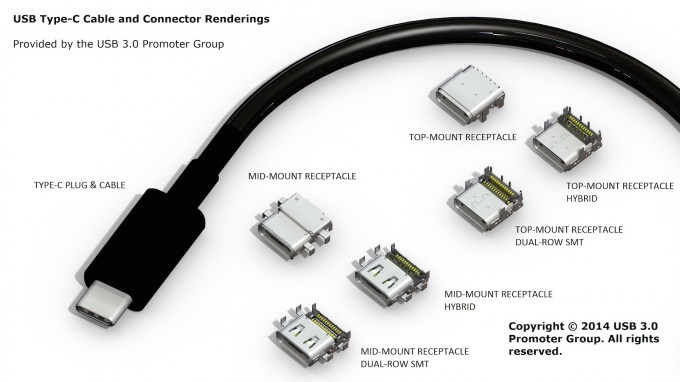 The USB cables are limited to 5Amps, but as many might be aware, USB is traditionally 5Volts; put the two together, we have 25Watts. So where is the 100Watts coming from? New negotiable voltage selection, via 6 different profiles. These include the standard 5V, plus 12V and 20V, ranging from 1.5-5.0Amps. What this effectively means is that it’s now possible to power full sized 3.5" hard drives over USB, recharge laptops, and possibly power monitors.

The new connector and standards are certainly very appealing, and in many ways, long overdue. The problem still remains that this will all take time to roll-out. Type-C is not directly compatible with existing connectors either, but adapters will be made available. All that remains is for manufacturers to start rolling out the new standard, one port at a time.