It’s a little hard to believe that it’s already been an entire year since VEGAS Pro 19 released, but here we are, witnessing the launch of VEGAS Pro 20. There doesn’t seem to be a press release (yet) that breaks down full changes, but the official “What’s New?” page lists a number of updates.

For subscription users, an ability has been added to drop files for easy sharing between collaborators, while a stock video and audio archive has over 1.5 million assets to look through. Also new is the ability to convert speech to text – and vice-versa – while the Android and iOS apps have been updated to allow footage to be easily shared to your desktop for immediate use in a project. 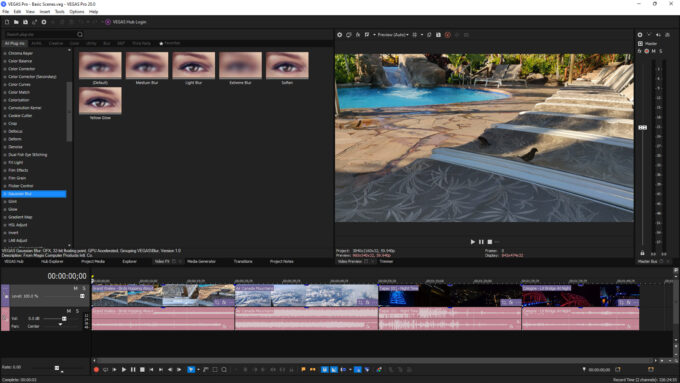 Color-grading seems to have received huge focus in this update, with improved tools that will help make the entire process of grading more efficient. It’s mentioned on the What’s New? page that Blackmagic RAW support has been added, but that was a feature that shipped with VP 19. We’d assume that the implementation has been updated somewhat, but even that aside, it is noted that Apple ProRes RAW support is also available.

As usual, we intend to explore the latest VEGAS Pro from a performance stand-point soon, and get an article published showing how current GPUs (and possibly CPUs) fare. Unfortunately, we didn’t get this done for VEGAS Pro 19, as initial testing showed sporadic behavior (where slower GPUs would perform better than faster ones). We hope to have better luck this go around, and will work with the developer if we do encounter any particular issue that stifles progress again. It’s been too long since the last in-depth look, so we want to get caught up!