Hot on the heels of the Broadwell desktop launch, Intel releases the first wave of its 6th-gen Core processor line-up. Codenamed Skylake, these CPUs are targeted at gamers and overclockers, and based on what we’ve seen, they could become the first truly tempting CPU upgrade in quite some time for those who swear off the need for a CPU upgrade.

Update: Bundled processors and motherboards are now available from Newegg. Amazon also has started to roll out the i5-6600K and i7-6700K – prices are subject to change.

Intel is on a roll again, and today’s emotion is: confusion. Did you or someone you know spend a paycheck or two on a brand new Broadwell-based Intel system? Are you both feeling jealous and mischievous? Well, today is your lucky day; Broadwell is officially so last month; say hello to the new performance crown that is Skylake!

The 14nm ‘tick’ Broadwell micro-architecture was officially launched September last year as part of Intel’s mobile-focused low-TDP processors. In fact, all of the Broadwell-based CPUs up until June this year were mobile/laptop based parts, even those used in UCFF units such as Intel’s NUCs. It was only recently that desktop parts became available. Yet here we are again, with a brand new micro-architecture for the desktop. 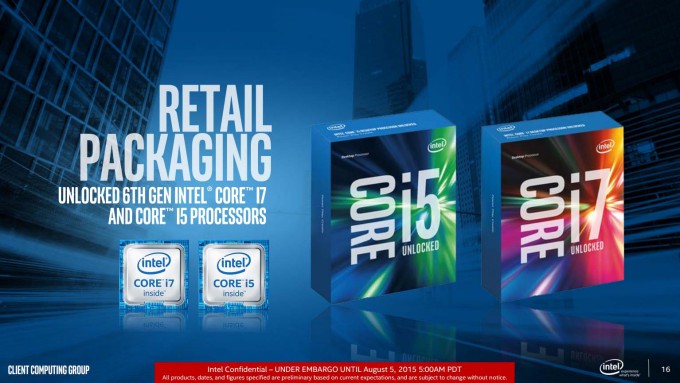 Skylake is the ‘tock’ part of Intel’s ‘tick-tock’ strategy. While tick is about die shrinks and moving existing micro-architectures down to a smaller manufacture process, tock is about delivering new functionality by taking advantage of improved yields on the smaller manufacture process. Unlike Broadwell, the first parts will be desktop components.

Due to the odd timing of things, Intel is not declaring this the official launch of Skylake, but instead more of a prelude before IDF (Intel Developer Forum) hits in a few weeks. As a result, full details on the capabilities as well as details on the granular changes to the architecture are not available just yet. However, some of the more important details are.

It’s strange, but Intel has decided to do a complete launch reversal; instead of going with mobile parts first, it’s going back to it’s more usual launch strategy of high-end desktop parts, namely those targeted towards overclockers and ‘prosumers’. The first two processors out the gate are the i5-6600K and the i7-6700K, and the base specs are pretty impressive.

By starting with the K series, Intel means business. Skylake is one of the first chips in a long time that’s built for overclocking. It goes without saying that the Turbo is fully unlocked from the start. The Base Clock is fully unlocked, allowing 1MHz increments instead of fixed ratios. Even the memory uses 100/133MHz stepping, allowing for more relaxed multipliers (something that was part of the Broadwell release).

The stock speeds alone are worthy of note; the i7-6700K’s 4.0GHz within a TDP of 91 Watts? There will be some serious headroom when it comes to overclocks. It won’t be too surprising to see speeds around the 4.7GHz range on air alone (perhaps even 5.0GHz with large AIO water coolers?). Also bundled in on-die is Intel’s HD 530 Graphics core. 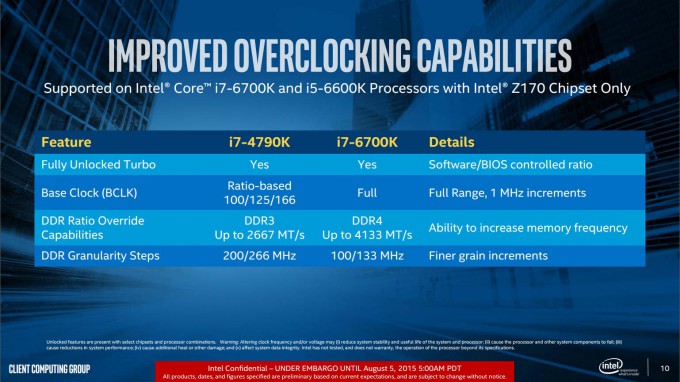 There is native support for up to 3 displays straight from the onboard GPU, however, whether this includes HDMI 2.0 and DP 1.3/1.4a is unknown. Same goes for native Thunderbolt 3.0 support, which we may find out at the upcoming IDF. The lack of USB 3.1 (gen2) is unsettling, since we will be yet again at the mercy of motherboard integration and their choice of (often inferior) controllers.

Since these parts are mainstream/high-end, and not the more ‘extreme’ range of CPUs, we’re still looking at 4 cores (8 threads for the 6700K), which after all this time (8 years since the first quad-core CPU), is disappointing. One would think that 6 cores would become a little more common. However, this is not entirely bad news, simply because most software can barely handle two cores, let alone four. It’s only recently that games (such as Metro 2033 & Last Light Redux) have begun to utilize more cores, so the concentration on better single-thread performance is still appreciated (if that is indeed the case). 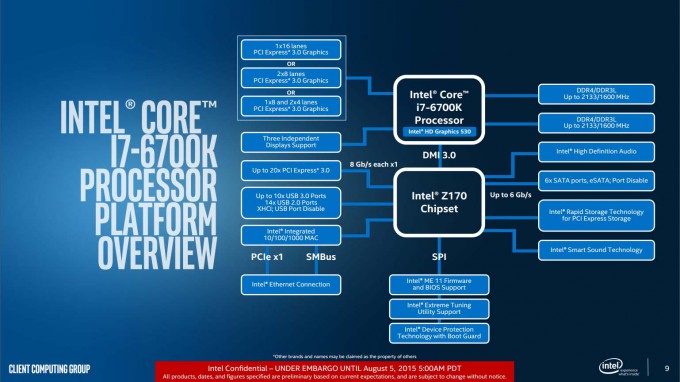 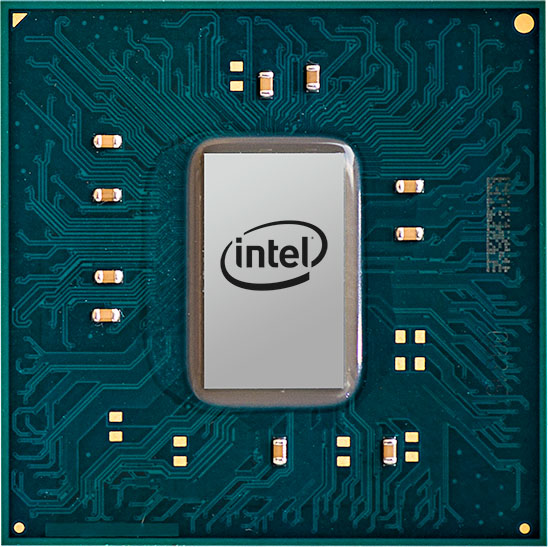 The dual memory is interesting as we are likely to see a mix of motherboards. Our guess right now is that the high-end boards will make use of the high-speed DDR4, while smaller boards, such as mITX and mATX will use the low-power DDR3L (SO-DIMM packages, such as those used by the NUC). This might even tie in with compact Steam Boxes with all the power of a high-end system.

Apart from that, that’s about all the information we’ve been given; kind of disappointing, right? As noted before, this is a prelude to IDF and we won’t get the full break-down on the technical specifications until then. A lot of the new features that have been rumored up until now regarding Skylake have still not been confirmed either. We are uncertain as to how many features (such as Thunderbolt 3) are part of the motherboard’s choice, or features of the CPU. Same for SATA Express and M.2 interfaces.

Still, with both CPUs and a number of motherboards becoming available, you can put your orders in now. 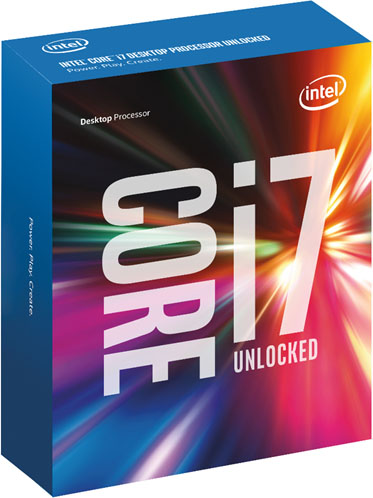 Our look at the performance side of Skylake is still in progress, as our motherboard sample arrived late. Given the delay, we’ll put a bit more time into testing and deliver an in-depth look as soon as possible. Stay tuned.