You didn’t really think that AMD was going to let 2015 wrap up without the launch of a new FirePro workstation card, did you? Just in the nick of time, the company has announced it FirePro W4300, a card that replaces last year’s W5100, ultimately delivering the same bang, for less buck. Let’s check it out.

It’s been a quiet year for AMD’s FirePro lineup up to this point,Â with just a single release taking place this past summer. But, what a release it was. The FirePro S9170 compute card might look simple on the outside, but it’s a monster inside. I’m not even sure how the card’s chassis manages to keep in tact given that it’s securing a staggering 32GB of memory.

The S9170 takes care of servers, but what about the desktop? Don’t worry: AMD wasn’t about to let 2016 get here without giving our workstations a treat, and this one comes to us in the form of the FirePro W4300.

The W4300 is, as far as I can tell, a near clone ofÂ theÂ W5100 released last fall, with the only difference I can spot being a dropped TDP. This might make it seem like a bit of an odd release, but what’s happening here is interesting: AMD’s taken the W5100 and fit it into a lower price point, in effect giving us more performance for our hard-earned buck. 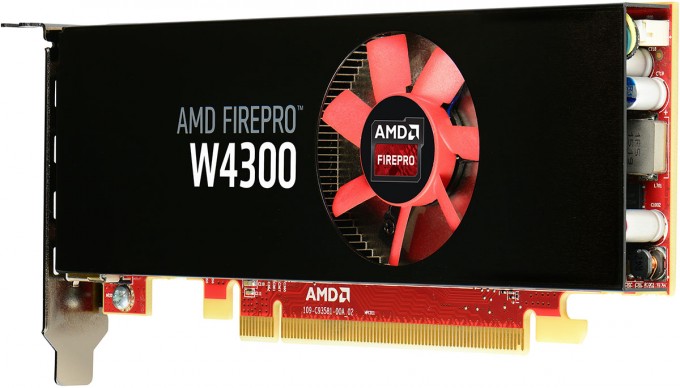 I think it’s also worth highlighting the fact that this card has a “3” in its model name, rather than a “1” like every other current-gen FirePro WS card. I was told that there is no real significance to this, at least from an architectural standpoint, but it seems likely that the next fleet of workstation cards in AMD’s lineup will follow suit.

One of the standout features of the W4300 is that it’s a low-profile card, catering to a fast-growing market of small form-factor workstation PCs. This, coupled with the fact that it doesn’t require a power connector, makes it an extremely accessible product.

Since it’s a bit of an issue trying to install a low-profile card in a regular-sized machine, AMD will be including a replacement bracket in the box in case a conversion ever needs to be made. Performing this surgery involves removing four screws to lift the shroud, and another three to remove the bracket. Overall, it’s a very simple process that can be done in just a few minutes (but prepare to deal with the smallest screws you’ve ever seen in your life!)

The FirePro W4300 arrives at a not-so-coincidental time, as Autodesk University kicks off today in Las Vegas. At its core, the W4300 is targeted at the CAD market, and that of course means that it’d be a great solution for AutoCAD users. AMD is keen to stress that despite the card’s modest stature, the W4300 isn’t a slouch. Like the rest of the FirePro lineup, this card is certified for use with top-flight design apps, including PTC’s Creo, Siemens’ NX, as well as Dassault’s CATIA and SolidWorks.

As the below slide helps point out, this card is designed for those who design, draft, model, and validate. If your needs are a bit simpler, a lower-tier card could be opted for, whereas for simulation and rendering, a much more powerful card should be called-upon. 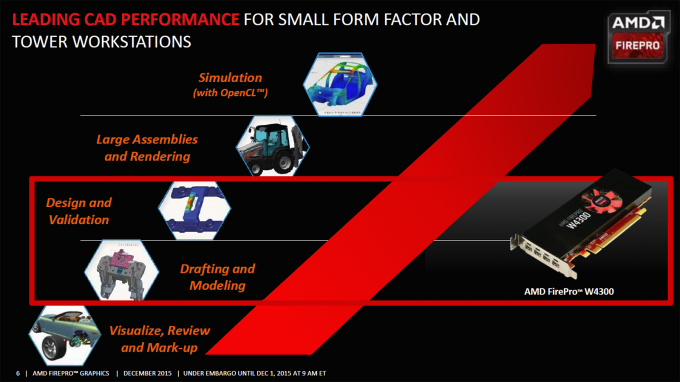 On the topic of specs, the FirePro W4300, as mentioned above, almost matchesÂ the W5100 to a T. It’s based on the Bonaire GPU architecture and features 768 processors, as well as 4GB of memory. Total throughput is 1.43 TFLOPs of single-precision performance, and 96GB/s of memory bandwidth. Unlike the W5100, which is a <75W card, the W4300 has culled power consumption down to <50W.

The target the W4300 has in its sights is NVIDIA’s Quadro K1200, a workstation card that came out earlier this year. On the SRP front, the W4300 bests it, although current street value of the Quadro card could force it to drop from its perch of $379 down to one 50 bucks lower.

AMD says that its W4300 will handily beat the K1200 in most tests, and unfortunately, this is something I’m unable to verify as I do not have that card (or anything else in this range.) Based on the performance information I’ve been able to scour, though, and also what I’ve seen in my own testing of the W4300, that does appear to be true.

The company even says that in select cases, its latest FirePro could even surpass the performance of the K2200. In particular, AMD found that its W4300 performed 5% better than the K2200 in SPECviewperf’s Creo test, 19% better in SPECapc’s SolidWorks test, andÂ an impressive 33% faster in SPECviewperf’s Siemens NX test.

I regret to not have a basis for comparison here, but I can verify that the promises AMD has laid out for this card do in fact align with the test results I am seeing. In particular, the W4300 scores very well in SPECviewperf’s Creo and Siemens NX tests.

Ultimately, the performance offered for a card of this form-factor, and not to mention power cord-free, is impressive. Also, while the card features a fan that looks like it could be a little screamer, that’s not the case in use. Even during the most hardcore of SPEC tests, the card remained virtually silent, completely drowned out by any ambient sound made from the machine’s other fans. In a small form-factor chassis, the GFU might get a bit warmer, but noise should never be an issue.

One thing I haven’t mentioned yet is that this little card can support up to 4x 4K displays right out of the box. With a hub, that number jumps to 6. Not too bad for a GPU that’s not much larger than a smartphone.

Speaking of small things, in case it’s not obvious enough from the pictures, the W4300 uses mini-DisplayPort ports for the sake of saving space. While these cards are sure to ship with at last one mini-DP-to-DP adapter, you might need to source additional cables for extra monitors. Unless of course the monitors you happen have provide mini-DP ports natively.

Overall, the W4300 isn’t the most impressive FirePro card we’ve seen launched in the past year-and-a-half, but getting the same performance for less money is always going to be welcomed. And, with this being the first card to carry a “3” in its name, we can hope that this means that it won’t be long beforeÂ other new FirePro cards drop.