It was a little while ago that I was asked to take a look at the latest offering from Kingston aimed at the mobile sector – the Kingston Wi-Drive. The Wi-Drive is an interesting product – it’s essentially a small (16-32GB) SSD with a wireless 801.11a/b/g chip tacked on, designed to allow you an off-phone place to store information. To use it, you simply connect to the Wi-Drive’s wireless network and stream from the drive itself. Simple, no?

There are many reasons one might wish to do this – the most common reason is simply that your phone is out of space. However, the advent of iCloud and other streaming-type services render this a less and less needed scenario. Data preservation is a second “feature”, though you’ll likely have backups elsewhere.

This leaves two particularly unique areas for the Wi-Drive, which it accomplishes well – keeping data you want privately accessible off of your phone, and sharing data across multiple phones. Neither of these goals are met easily by anything else on the iOS platform.

The Wi-Drive is a simple device, and it makes no bones about that – there is exactly one button, a couple LEDs hidden below the shell, and a mini-USB port at the top. The whole package is lightweight, understated and simple – just as it should be. Inside the box, you’ll find nothing more than the drive, a very tiny instruction booklet, and a cable to connect the drive to your computer. 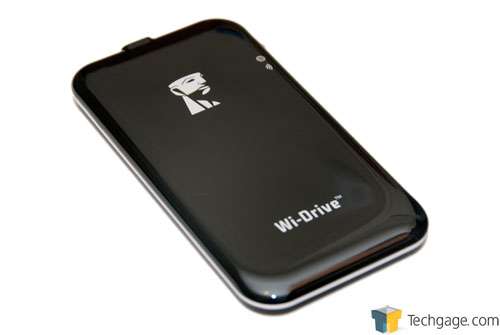 Turning the device on and off is done by holding a little button on the side, which glows green when it’s turned on. The holding feature is nice – you’re not going to turn the device either on or off accidentally. For something that’s broadcasting your data, that’s a pretty big plus. It’s not particularly wobbly or flimsy, and you need to hold it in for about two seconds to accomplish its task. 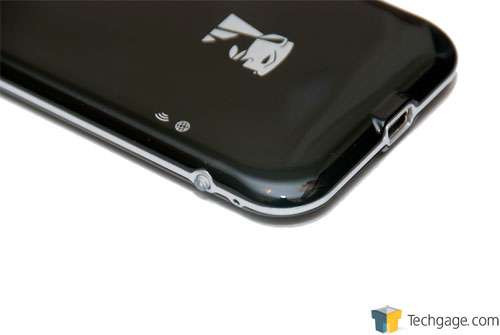 Though the entire device is lightweight plastic, it doesn’t feel like it’s going to fall apart in your hands – or even with a small fall. It’s certainly not the “hockey puck” that the original iPhone was, but it’s plenty rigorous enough to take a knock or two.

Using the drive requires a bit of understanding as to what is possible with it, first. It’s a device meant to stream your data, be it documents, pictures, movies or music. Though it can be used to move files that are being edited back and forth between the iPhone/Android and the Wi-Drive, it’s a clunky interface for that and not highly recommended at this time – at least by me. Hey, I’d rather you know up front.

The Wi-Drive application is free in the App Store on iPhones or the Android Marketplace for Android devices, though I’ve only tested the iPhone and iPad variants. Using the drive is as simple as downloading the app, turning on the drive, choosing that as your network and opening the app to browse files. What, it’s empty? I bet you forgot to plug it into your computer first, and copy files to it! Any directory structure will do, the app searches through for files of different types. 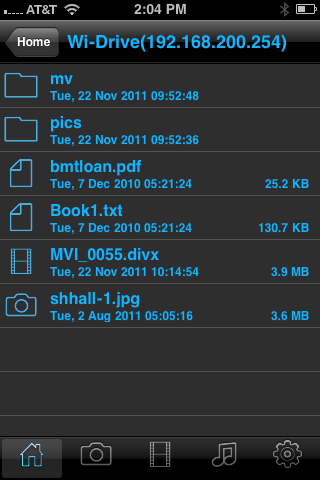 It’s important to note here that the Wi-Drive “hands off” files to the proper default application on the iPhone, meaning that you can only play formats that the device already supports. Therefore, your music can be in AAC and MP3, but not OGG or FLAC. Movies, also, will be limited to variants of the MP2/MP4 codec and containers.

I have attempted to slip around these limitations via installing other applications, but unless that application interfaces with iOS sufficently to associate itself with a file type (like office docs, pdfs, etc) then you’ll be out of luck. Similarly, I have not been able to “stream” off of the Wi-Drive as either an HTTP or a Samba device, much to my dismay. This is a feature that Kingston will be able to tweak in future updates, so I’m not panning it just yet – but I hope that they are working on it.

One feature recently introduced with the new Wi-Drive app at the end of last month was the ability to copy items to local storage on your device. Please note that this storage is still limited to only within the Wi-Drive app itself, and is not visible necessarily via other programs like Photos or iBooks. As such, you still have to open the app to look at even locally stored data.

The final feature, which is again new to the device since its last update (see why we didn’t post a review earlier?) is the ability to email files up to 10MB in size. While this is still a cumbersome way to move files like photographs to the iPhone’s more native applications, it is a nice addition that you can finally show someone your pictures or play a song and then be able to email it to them.

Opening a document in a different application, copying it to the iDevice (or back) and emailing are now all basic “actions” that can be performed by swiping on the file name. 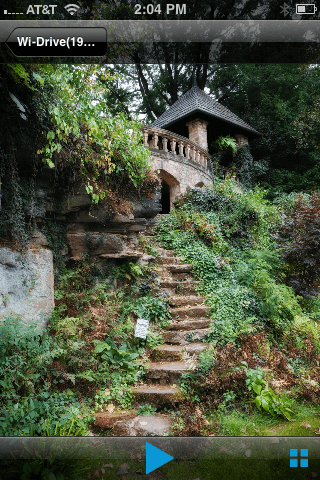 It’s worth noting that prior to the local copy and the emailing, there was literally no way to move things off of the device – making it a one-way island for static data. When we talked with Kingston about this limitation, it told us that many additional features would be able to be added via software fixes in coming updates, including these. They’ve kept up with that promise so far, and these changes are very welcome indeed. We will hopefully see capability grow more as Kingston pushes on with the device.

You might have thought that’s all there is to the device, which at its default settings would be the case. Fortunately, though, Kingston offers a few extra goodies to work with. The first is that the Wi-Drive is a network “hotspot”, and as such it broadcasts a signal and provides security for that. You can hide and change the SSID and protect your Wi-Fi communications with WEP, WPA, WPA2 and WPA2 Enterprise security. This allows you to turn your Wi-Drive into a stealthy device that only you know about and can log into.

Also in the configuration is a ‘pass through’ to other networks. This is a kind realization by the folks at Kingston that their device is actually taking up your wireless connectivity. Simply enter your network credentials inside the Wi-Drive app, and the Wi-Drive will pass requests that are not meant for it onto the subsequent network – a wonderful feature.

However, Internet access will not be available if you don’t have a subsequent wireless network to link to “through” the Wi-Drive. This is an odd software/hardware combination limit – Apple itself knows how to fall back to 3G when the Wi-Fi flakes out, but when the Wi-Fi network shows itself as working then there is no fallback. This means that if you use the Wi-Drive and don’t set it up to connect “through” to another network, you will not have internet access at all during that time. 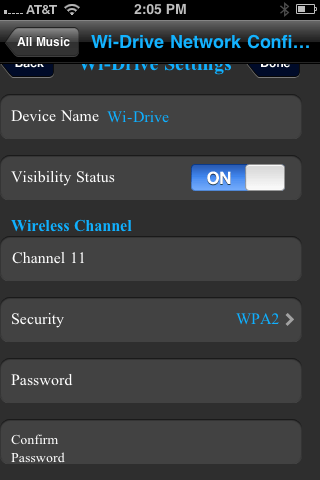 Whether this is a dealbreaker for you depends on your usage – certainly for video streaming, it’s not much of a concern. However, for most other usage, it could be problematic. This is another item that hopefully is coming up on Kingston’s “fix it” list.

One of the neatest features that I have found for the Wi-Drive is the ability to have more than one device connected to it at a time, and thus have the ability to “share” a repository of music or movies. This works wonderfully and I have accessed the device with three separate devices simultaneously to test it (two iPhones and an iPad) with no problems. Bandwidth on the device has not been a problem for playing either movies or music, as it’s streaming at full 801.11g where capable and most video for iDevices is not particularly huge. Since the drive is SSD, there is no real place for the hardware to get bogged down.

The average battery life of the device will hover somewhere around 4-5 hours of usage, which is somewhat impressive for what it does. However, don’t even think about throwing it on your computer for 20 minutes to charge – my first full charge after depleting the battery a good ways was well over an hour. I can expect that subsequent charges will take about as long (I’m on charge three after testing at the time of this writing). If you are not using the Wi-Fi constantly to stream from the Wi-Drive, battery life will increase to a solid 8-9 hours. I know this, because I accidentally left it on and walked away once – to return 8 hours later and still have the it play videos for another 40 minutes.

There’s another important caveat to mention. While most devices will charge and function at the same time, that can’t be said about the Wi-Drive. While it charges, the media on the drive will remain inaccessible. As something like this should be feasible, this looks to be an oversight on Kingston’s part.

The Wi-Drive is an odd product for me – for what it does, it does it well… I’d dare say better than I could have thought. However, the issue comes down to whether or not it’s a device you actually need.

At a cost of $70 USD for 16GB and $90 for 32GB, the Wi-Drive is not the cheapest addition to your lineup. For storage concerns, there’s Apple’s iCloud for iDevices and most Android phones offer microSD slots to expand limitlessly. Factor in the difficulty moving files to or from the Wi-Drive and you have essentially a guaranteed “no thanks.” 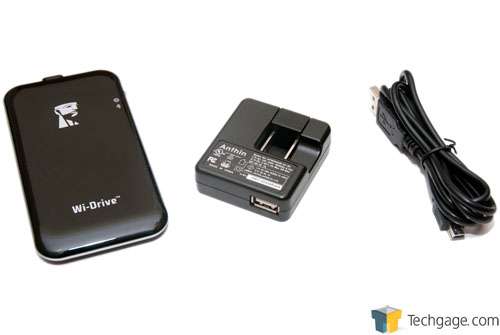 However, the Wi-Drive offers the ability to stream a good amount of data (and thus not stutter) like videos to more than one device simultaneously – all with security to protect your treasured goodies from prying eyes. It does this so well, in fact, that I wish Kingston would take a look at some of the hardware-based encryption that could be added to the device so that a thief couldn’t simply connect the Wi-Drive itself to the computer to steal all your stuff. It would be a perfect secure streaming hub. For less secure basic needs, it already is – and there is very little (if anything) that offers this particular benefit on the iOS platform.

Long before it can be a recommended buy at its current cost, though, Kingston has some work to do – it would be one thing if you could access more filetypes, or move things on and off of the drive to the rest of your device (and not just its own app). The software has potential, and the hardware is already good – but there are still some things that need done before the Wi-Drive is a must-have for every pocket. Sadly, the release of iCloud may kill a lot of its need altogether unless Kingston focuses hard on its unique features and less on its ability to just store more stuff than your phone has space for.