Do you wish your keyboard set had High Definition Technology? Well, you may just be in luck! The Laser Desktop 6000 includes a feature packed keyboard and laser mouse with 1000DPI for great precision. Let’s take a look at see if this desktop set is all it’s cracked up to be.

Microsoft is best known for their Operating Systems but they also have quite the reputation for their input devices. I’ve never met anyone that’s never heard of either a Microsoft keyboard or mouse. In fact for quite some time they set the standard for both.

Today we’re taking a look at one of their latest combos. The Microsoft Wireless Laser Desktop 6000. The 6000 comes in what’s becoming pretty typical display packaging. There is a cutout with the mouse under a molded plastic blister and a photo representation of the keyboard. 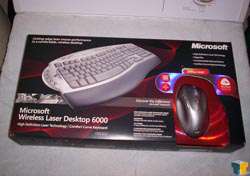 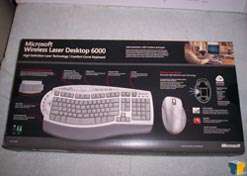 On the back of the package are some details about the the features of the mouse and keyboard. 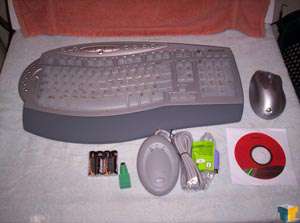 Inside the package we find the mouse, keyboard, receiver, USB to PS2 adaptor for older legacy only motherboards, 4 name brand AA batteries and the driver disk. 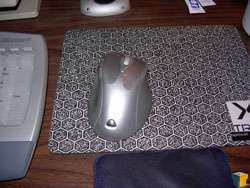 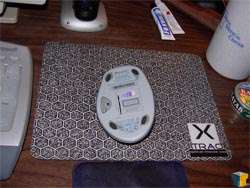 The mouse is of the laser type using a laser rather than the usual LED for tracking the surface of your mouse pad. It comes with 4 black plastic feet that while smooth were not very slick so I improved upon them with a BFG mouse slicks kit to make the mouse glide a bit better. On the side of the mouse where your thumb rests are two buttons, the front button is rather small and the rear button is a bit over twice as long. The front button is set up as forward by default and the rear button is set to zoom bringing up a zoom interface similar to the zoom function in accessibility.

I personally see no need for a zoom function so I set it for "back" for enhanced web surfing ease. The mouse wheel has a very slight series of ridges to aid in grip and is tilt able for side scrolling. It also has no click detents which for up and down scrolling is very nice it offers you no feedback for gaming. Microsoft sells this setup as a general purpose desktop and doesn’t recommend it for gaming purposes and this is most likely why. The mouse offers precise tracking and would make a very good gaming mouse if it wasn’t for the lack of detents. You can even set the mouse to go by Windows settings by depressing the scroll wheel thus allowing you to set the mouse to react faster in it’s software for general usage and to have higher precision with lower speed in Windows settings. This is great for those of us that need to have fine control for applications such as Photoshop or Paintshop Pro. 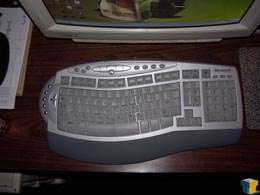 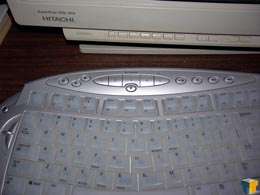 The keyboard is a quasi ergonomic type keyboard. the keys don’t run in a straight line and instead follow a gentle arc with keys that vary in size with standard sized keys on the outsides and gradually widening keys towards the center. It also has five programmable favorites keys that can open either web pages or programs depending upon how you configure them along with a starred "My Favorites" key that opens a dialogue box showing the paths of the five favorites keys. There are also multimedia keys along the top.

Along the left edge of the keyboard there are a few more shortcut keys along with a zoom lever. The shortcut keys are all self explanatory and the zoom lever works by increasing or decreasing the font size in open documents or web pages. this is quite unlike the zoom function of the mouse which actually brings up a zoom window that zooms an area that the cursor is held over, text, images and all. 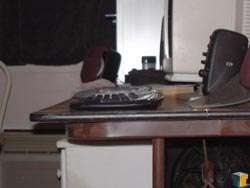 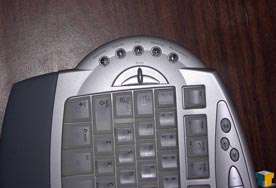 Here’s where we get down to brass tacks: How does the Laser Desktop 6000 rate? For usability the mouse scores well, I’d say an 8/10. The lack of a clicking scroll wheel is what hurts it. The shape is pleasant to hold, the feel is great overall and the buttons function with a satisfying "click". You know when you’ve actually pressed the button that the job’s been done. The keyboard on the other hand, it’s marginal. Overall a 5/10. The key strokes are very smooth and linear, the button placement is well thought out and if you’re a touch typist the curve to the keyboard could well be a bonus after you’ve become accustomed to it.

It’s hurt by the heft though. It feels like something made by cavemen, yes it’s polished and pleasing to the eye but then again it’s about as subtle as a club. A keyboard should blend into the workspace and become a part of it and not dominate it and that’s what the Laser Desktop 6000’s keyboard does, it dominates the workspace rather than blending in. It doesn’t allow you to tell it how you’d like it to function, instead it tells you how you’re going to function with it, no compromise.

Since I can’t throw the bad away and go solely with the good I’m awarding the product as a whole a 7/10, I realize that 13/20 should come out to 6.5/10 (both scores added then divided by 2) but I feel that the mouse is good enough to rub a little polish off onto the keyboard and add a half points desirability to the combo as a whole.

Feel free to discuss this review in our related thread!